Fountain of my Youth 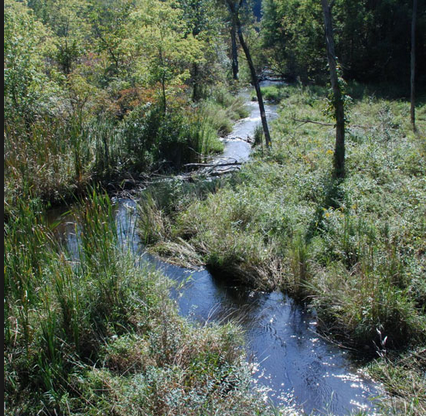 Elsewhere in these pages, I've mentioned the name "Hay Creek," a geographic place name that depicts both a tiny freshwater stream in south eastern Minnesota, and also the name of the small township nestled between limestone bluffs where my childhood home was located.

Hay Creek—I'm talking about the little stream now,  the "crick" as we pronounced it— has always held a somewhat mythological significance for me. This might seem strange, since I grew up only about 7 miles from the mighty Mississippi River itself— the same river mentioned so prominently in the first real novels I ever read, Tom Sawyer and Huckleberry Finn. Certainly I grew up in awe of the mere idea of "The River."

But it was little Hay Creek that held the deepest meaning for me. I was perhaps 4 years old or so when I traced the dry gully bed that ran behind my childhood home to the point a mile or two away where it emptied into Hay Creek, with its musical, flowing waters, its small trout hovering motionless in the shadows, and crayfish clinging to the bottoms of rocks.  And I quickly realized that Hay Creek itself emptied into the mighty River itself at some mysterious point in the distance, and that the River itself eventually found its way to the Gulf of Mexico and the ocean itself. During big rainstorms or the spring melt,  when the gully turned into an active stream on its own under the outflow of waters off the hills, I pondered how long it would take those waters to reach the Atlantic Ocean. With a childhood that was a little uncertain and a lot unpredictable, the certain, steadfast cycle of waters, from sky rain to run-off from the bluffs, to the gully, to the creek, to the River and to the Ocean—was exceedingly reassuring to me. It was a very concrete idea I could hold onto.

The creek was the principle area of play for kids growing up in the township. The "big city" kids of Red Wing were swimming at the chorine-filled municipal swimming pool, while we learned that the creek had natural deep spots at its ox-bow turns, and that if you build your own dams from rocks on the downstream side, you could create even deeper pools to swim in. While the town kids were catching hideous bullheads along the mud flats of the Mississippi, we were snagging much more interesting little brown trout by plying the shadows beneath the big timbers of old railway trestles that spanned the creek.

From time to time over the years until I was 13 or 14  I occasionally made efforts to try and figure out where little Hay Creek began its official run. The maps put it somewhere to the south, near a little town called Goodhue, but in those days before Google Earth, it was hard to pinpoint it.  The lateral distance covered by Hay Creek, as the crow flies, was only 12 miles or so, although its sinuous turns certainly at least tripled or quadrupled the actual length.  In my mind's eye, I imagined the creek to start at some mysterious natural spring bursting forth from the side of a bluff somewhere in a hidden valley.  I did know for certain that it was more than just a watershed runoff creek, because even in the driest weather, the creek ran with some water—enough so that small trout and crayfish could continue to exist even after two or three weeks of the sunniest drought.  From the time I was six years old or so, I occasionally took adventurous daylong hikes upstream, thinking that I would discover the source of Hay Creek, like some young Meriwether Lewis in Converse sneakers. On two occasions I found little tributary feed streams, both of which were indeed fed by small seeping springs that oozed up in cow pastures and flowed down to bolster the flow of the creek. But the ultimate source always eluded me. Each time, daylight ran out before I finished my expedition,  and I always ended up calling home from a farmer's kitchen or saloon owner's bar to have my Dad come and pick me up. Wisely, he knew that I needed the quest and did not manhandle the exploration for me by chaperoning these adventures himself. Instead, he patiently picked me up when I called him from 8 or 10 miles away on some early evening in August or September, foiled again in my search for the Heart of Darkness.

About the time that junior high school started, new adventures beckoned (they had long hair and wore bikinis), and I lost interest in finding the long-lost headwaters of the the 12-inch deep, mighty Hay Creek.

So I never did find the source of Hay Creek. Until recently.

A few days ago, on a drowsy weekend when my wife and I were already visiting her parents (they still live in the same county where we grew) I dialed up the territory on Google Earth, and carefully tried to trace the upper ends of the Creek and pinpoint the location. It's a method only possible, really, with satellite views of a rural countryside—not an available technology 50 years ago.  The exercise was prompted, I suppose, by the recent passing of my father. I'm sure there was a bit of nostalgia in my choosing to resurrect my search for origins at this particular moment.

The next morning, just as dawn broke, I drove out into the countryside to a point where high-tension power lines crossed a little gravel road, then followed the utility lines inland and downward, across a deserted railway bed,  to a point where two small drainage ditches joined and crossed beneath a farmer's field access road, through a 16"in wide culvert to become something like a tiny little creek. The waters only barely flowed at all, but once there is discernible motion and flow, you're looking at more than a puddle.

To all intents and purposes, this was the start of Hay Creek's ultimate run to the ocean. Though I could see, even now, that it was by no means a definitive beginning. The little drainage ditches themselves continued a bit further, and when I followed one of them, I saw that you could make the case for the creek beginning in a single crease that passed through the middle of a single alfalfa field, where it appeared that a microscopic seep spring moistened the grass enough to create a tiny rivulet. Hay Creek had been named most appropriately, indeed, because its source seemed to be the middle of a hay field. 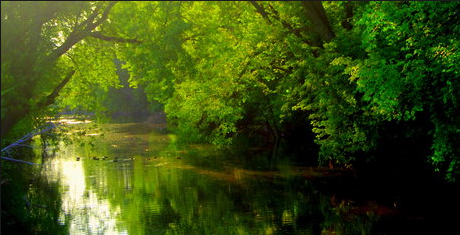 Later that morning, I drove back into Red Wing to pinpoint the spot where Hay Creek entered the Mississippi. To my surprise, I found that the terminus was no more definitive that the stream's beginning. As it approaches the River, Hay Creek first feeds into a large marshy area a couple miles from the Mississippi itself. Environmentally, this is a happy occurrence, since  the creek waters undoubtedly carry some fertilizer residue from the many farms along its route, and the marsh lands help scrub the water before it goes any further. Then, Hay Creek resumes in a tiny outlet flow, passes under the Highway 61 of Bob Dylan fame, and quietly enters the Mississippi River in a muddy little delta, a faint echo of the massive delta where the Mississippi will eventually find the ocean 2,000 miles downstream at the bottom of the continent.

So in the final measure, this mythological stream of my youth proved to have no real drama in either its beginning or its ending. You might think that this was something of a disappointment to me, but it was not so. At my age and with my experience, the fact that beginnings and endings are hazy, imprecise affairs is no longer unexpected news to me, and in fact is a little reassuring.

Nothing is less certain than a beginning or an ending, and it's because of this that world allows for so many interpretations and possibilities.
Posted by The Geezers at 6:04 AM