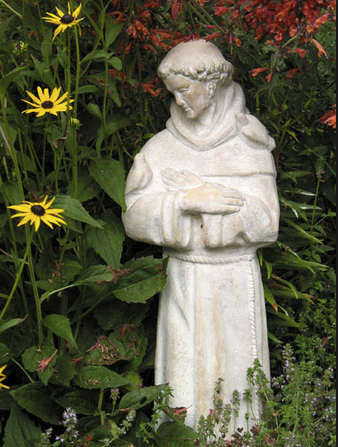 On a breezily balmy, cool night in early September, I take an evening walk, and as is sometimes the case, on the way back I pause to sit in a small sanctuary on the grounds of the nearby Catholic church. A small statue of Saint Francis stands opposite a small wrought iron bench, and the little sitting area filled with flowers is partially enclosed with short shrubs. On a nice night, it is a very pleasant place to sit and reflect for awhile.

From the nearby neighborhood, I see a 60-something woman smoking a cigarette approach. She is wearing a bathrobe and slippers and is leading two frantic little black dogs on retractable leashes. She climbs the concrete steps onto the pristine lawn that fills the space between the chapel and the rectory, walking in a direction that's not directly toward me but which will take her right by my location.  She's out for the nightly constitutional with her dogs, and this possibly is her normal route in the evening.

Just before she gets to the little grotto, her dogs stop to have their evening crap, simultaneously. The woman looks around in the falling night for a moment, then continues her walk without cleaning up after the ugly little brutes. Then she arrives at the little sitting area, sees me then jumps back, startled. The dogs begin to snarl and strain at their leashes in my direction.

"Don't you dare take a step this direction," she barks at me. "While my dogs are eating you, I'll be calling the cops." She backs this up by fumbling for cell phone, apparently tucked into her pajamas somewhere well south of her waist band.

I think, "Really?"  The snippy little dogs would take an hour just to gnaw through my trouser leg, much less do any skin damage. Moreover, a pretty mild kick would punt each beast well back down into the parking lot (I have a friend who used to describe such mean spirited little purse dogs as "rats on a rope"). And finally, what in the world is threatening about a middle aged guy with a greying beard sitting quietly in a church yard contemplating a stature of St. Andrew?  I'm not the one out in public looking like a trailer park escapee and letting ugly little dogs crap on the pretty grounds of a churchyard. 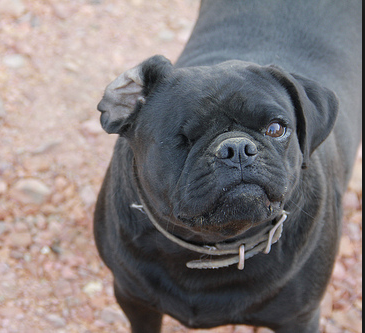 Now, the civilized, compassionate thing to do would have been to introduce myself, apologize for having startled her,  and reassure the woman that I posed no threat. After all, nobody develops a character like this unless through some inherited or learned fear, and unwinding such a thing requires that you contradict those fearful expectations.

Instead, I do a slightly evil thing. I remain utterly motionless, and stare past the woman  into the distance, ghostlike in the semi-darkness. This will, I know, be far more unnerving to her and cause her to remember the event for a long time, possibly even interfering with her sleep tonight.