I found something of a gem today in downtown Minneapolis. Like most cities, our small midwestern enclave has striking little examples of very nice architecture that won't make any national registries but are still very nice in their own way.

The Lumber Exchange is one such little gem in Minneapolis. It was built in 1885 to serve the bartering of timber goods in the upper midwest, much the same way the grain exchanges began to have their hey-day a few years later. The upper midwest was, of course, densely forested with amazing stands of pine in the 19th century, and this building served as a small "stock exchange" for the buying and selling of lumber moving down the upper Mississippi River and then onward to other US cities and foreign ports.

(Actually, at the time the Exchange was built, furs and other traded goods could be transported south via river only this far due to white water rapids here, and then had to be transferred. A few years later, when the army corps of engineers constructed the lock-and-dam network to making full length river shipping a possibility, the gain and flour industry that was replacing the timber industry in the upper Midwest would find it possible to ship all the way to New Orleans via the mighty river. But before 1900 or so, the Grain Exchange, and indeed the city of Minneapolis itself, had sprouted because this was the spot where river transportation had to give way to wagons, trains, and other means of transporting traded goods from the north. The stretch of rapids here offered other benefits: it powered mills for sawing the timber into lumber, and later, grinding grain into flour.) 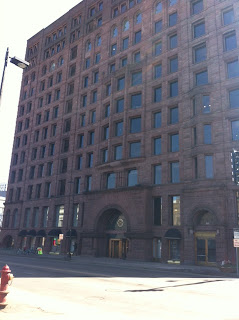 I have walked through this building at least a couple of times a week for five or six years now, because it is connected to other parts of downtown via skyway. Even in good weather, though, the hardwood and marble interior surfaces alway draw my attention. Though I know nothing about architecture, really, I certainly do know what appeals to me, and the Lumber Exchange is one such structure I'll go out of my way to see regularly. 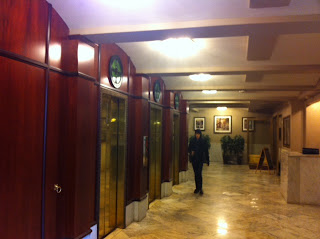 Today, though, I had to drop off some work-related paperwork at a lawyers office on the sixth floor of the Lumber Exchange building, and for the first time I used the elevator in the building. As I rose to the intended floor, I saw that the back of the elevator was glass paneled, and that once above the third floor, looked out upon an entirely walled off atrium that extended all the way from the third to the 12th floor. The enclosed atrium had a modern water feature in it, and was surrounded by small patio tables and park benches. Best of all, nobody at all seemed to be using it, even though we were in the heart of lunch hour. 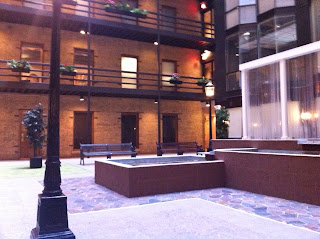 After running my errand, I got off on the third floor and entered the atrium. It had been formed, I saw, by closing off the alleys to seal the space between three separate building occupying the entire city block: the L-shaped Lumber Exchange, a modern addition to that structure added in perhaps the 1960's, and another building that is otherwise pretty ordinary. The roof area had then framed in by timbers and lined with skylights far above. The result was a restful little indoor park area, with dim diffused lighting offered by the sky far above that is augmented by period street lamps and fixtures attached to the old brickwork that once formed the back outside walls of the buildings within the back alleys. 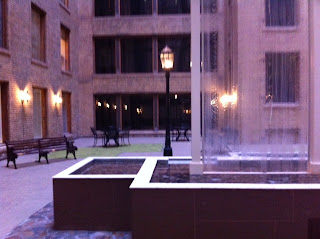 For the half hour I sat there quietly, not another soul appeared, and I realized I'd discovered a rather perfect place for a bit of quiet reflection on those days when the hustle of the office and downtown gets on my nerves. The sound and sight of running water from the fountain gives this space a very nice Zen-like aura.  On warm summer days, I have another outdoor park that serves this function, but on cold and rainy days (and they are plentiful in Minnesota) this new refuge will serve nicely.

Such discoveries are the reason I'm constantly glad that we moved our office from sterile suburbs to an urban downtown.