Mr. Wells, Time to Go Back to Fargo 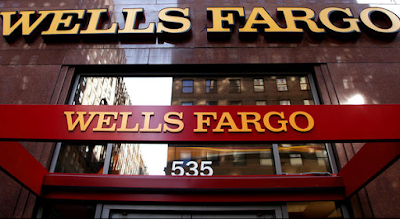 The Mercurious household has for many years banked with Wells Fargo.

Wait until I finish to call me an ignorant jackass.

I'll grant you there is no real reason for this banking loyalty except laziness and simple ennui.  For many years we banked with a very good local banking corporation known as Norwest, and when they were acquired by Wells Fargo a couple of decades ago, we just went along for the ride. And never bothered to dismount.

Wells Fargo has been known for years as one of the better (or at least less evil) giants of the big national banking conglomerates. It did not, for example, hang its tits fully out the car window in the outrageous mortgage debacle that threatened to bring down the entire US economy in 2008 and 2009, and overall it is viewed as the best managed of all the huge banking corporations. Seriously: that's its reputation.

That's not to say that Wells Fargo hasn't annoyed me. The fact they have gradually and systematically tried to increase the fees they charge to consumers for the right to hold their money and lend it out to others at 5 to 23% interest is pretty damned outrageous, after all. The not-insubstantial minimum balance I've graciously kept in their vault for 20 years has likely earned them many times that amount in credit card or mortgage interest charged to some other customer. And for funding them, they try to charge ME a fee.

But I understand that gone are the days of my youth, where the local hometown bank would at least give you utterly free checking simply because you were loaning them your money to fund their business.

And after all, you simply can't find a major bank anymore that offers this kind of old-fashioned customer service,  so I felt no reason to drop Wells Fargo. I mean, it served no purpose to give my money to Citicorp instead.

Another source of annoyance has been the fact that every single time I have business at the bank teller window, the Wells Fargo employee has ALWAYS tried to convince me that I should consider opening some kind of different, additional account. I mean this is pretty ludicrous, and I've told them as much:  what could be the possible purpose of opening a second savings account that gets .00000102% interest rather than the impressive .0000001% I'm already getting?  An extra .37 cents annually in interest is simply not worth the time to fill out the application. If you want a real laugh, look into the mutual fund offerings from a major bank. This is the reason why low-fee brokers like Vanguard are doing so well.

Mrs. Merurious and I are not stupid, so of course the only cash we keep in Wells Fargo is the emergency, disposable fund balances—just enough to keep fees to a minimum—yet each time you approach a teller, they check your balance and if it reaches some kind of lip-smacking threshold, they try to talk you into stepping into the back room to discuss "options for your money."  It's gotten to the point where I preempt them by saying "No, I don't want to discuss options for my money. Let's discuss options for you to shut up and deposit these checks. "

Now, of course, we know why they've been doing this.  Those Wells Fargo employees have been offered incentives by management to talk poor schmucks into opening additional accounts of dubious or nonexistent merit. And in many, many instances, it appears they were going ahead to open those accounts without even permission on the part of the customer, simply to reap the in-house commissions. This is called criminal fraud, my friends.

It gets worse, of course. This is not a few bad-apple employees, but 5300 of them (that we know about so far) who did this illegal no-no and have been caught at it. All 5300 have been fired, of which 10% were the managers who either planned the fraud, actively looked the other way, or were too incompetent to have watch-dogged their direct reports. The head of the division that perpetrated this fraud, Carrie Tolstedt, recently retired with a $125 million bonus, proving that not only was she a criminal/incompetent, but her own bosses were, too.

The truly scary part, of course, is that this is the banking corporation widely regarded as the best in the nation. What the hell then, is going on at JP Morgan, Citibank, Bank of America? One can only guess.

If Hillary Clinton has any brains at all, she needs to pick up at least this part of the Bernie Sanders platform:  the banking industry in America is an evil, greedy giant that will take us down if we don't do something quickly.

It's making my local Ben & Marvin's Credit Union and Barbecue Shack looking ever more appealing. At least their I get a free order with ribs for my minimum balance.
Posted by The Geezers at 10:40 AM 10 comments: