1.3 million people vacationed in Detroit this past weekend.

Well, that's a slight exaggeration, as a great many of the people who threw up armchairs and sunshades along the 20 mile route of the 18th annual Woodward Dream Cruise on Friday and Saturday were almost certainly folks living in the immediate greater Detroit region.  Still, though, it was estimated that several hundred thousand people drove and flew substantial distances to participate on this spectacle, which takes place annually in late August.

The Woodward Dream Cruise is a celebration of all things automotive, and especially the high-powered "muscle cars" over which car buffs drool.  There were thousands of these cars roaring up and down the avenue at the event, ranging from just pristinely restored and maintained "factory" vehicles, to elaborately enhances monsters with engines that bulged up above the hoods like aggressive tumors, roaring their distain for mere mechanical competence. The business parking lots all along the avenue are given over to food vendors and shiny aftermarket parts for these few days.  Nascar superstars are on hand signing autographs. At the many car dealers still lining the avenue, pretty blonde girls in tight tank-tops hawk the latest models from the auto companies who now make their vehicles in Canada or Tennessee or China rather than this area. The whole atmosphere is like a renaissance festival, albeit one where motor oil is the currency. 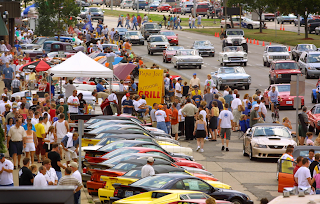 I'm not a car buff, but was there as part of a sales team experimenting with a new marketing tool—an old library book mobile that we converted and cloaked in an exciting modern "wrap" with a racing/automotive theme, from which we sell books on automotive subjects at various trade shows around the country. If you're interested, here's a link to an industry story about our experiment. The weekend was hard, hard work, but still a lot of fun and a truly fascinating cultural study. The car crowd isn't my demographic, but I was struck both by their inherent conservative patriotism, as well as by their genuine niceness. 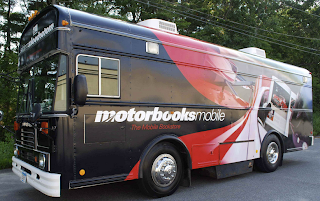 It's ironic how the automotive mentality still reigns in Detroit, despite the fact that the automotive industry largely deserted the region some years ago now, taking with it thousands of decent manufacturing jobs that once made Detroit a major and enviable American city. The irony is certainly lost on the crowd I hung out with this weekend, though, as Detroit is most definitely still "Motor City." At our hotel 9 miles from the cruise route, the parking lot was full of trailers that had hauled vintage and souped-up muscle cars from Texas, California, Florida, just to take part in the cruise. I talked to visitors from Austria and New Zealand and other far-flung regions who make this annual pilgrimage just to take part in the Cruise.

Detroit's woes are of course equally due to bad civic financial management, not just the betrayal of Ford, Chrysler, General Motors. And underneath the glimmer of this world class event, you see the tragedy of Detroit. Driving through residential neighborhoods, the spectacle is quite a bit different than what you might see in south-side Chicago or the grittier parts of St. Louis. In those cities, you often see entire neighborhoods abandoned. In Detroit, though, the decay is somehow even more awful, because the blight occurs in pockets in most every neighborhood. In one stretch of well constructed brick homes, about half of the homes were still valiantly maintained, with owners who were mowing their lawns, painting their trim, taking general pride in ownership like they do in any suburban neighborhood. But 10% of the homes were ugly empty shells with hollow gaping window holes. And about 30% of the homes, while still occupied, were clearly owned or rented by residents who had just given up. Here you saw unkempt lawns, window glass patched with tape, roof gutters so long unattended that virtual trees had sprouted up out of them. 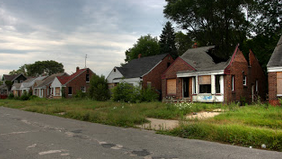 Somehow this all seemed more tragic that widespread urban blight, as you can't help but sympathize with the efforts of the residents who are fighting the good fight by trying to be upstanding homeowners in the midst of a city collapsing around them.

It's also clearly a Detroit problem. On roads that straddle the boundaries between Detroit and a first-tier suburb, the Detroit side looks like a war zone, while the suburban side couldn't be more different. How can it be that Detroit look like this while adjoining Southfield, mere seconds away, still looks and functions like a workable city? I don't know a lot about the recent politics of Detroit, but surely it has been poorly managed of late.

I couldn't help but hope that Detroit succeeds in its effort declare bankruptcy and start over. Yes, the city fathers may have made some serious mistakes here, but that's not the fault of the thousands of homeowners who still live here and provide services to schools, hospitals and businesses.

Here's hoping that Detroit makes it back from the brink.
Posted by The Geezers at 10:01 AM 5 comments: