Scene from an American Public School

Saturday saw me helping at a science competition event sponsored by the Minneapolis school system for elementary school students across the city. My wife helps coordinate these events, and I sometimes help out by running for supplies and helping with cleanup afterwards.

This particular event has teams of students build Leggo robots and then competing to complete various tasks laid down by the national event organizers. The best teams will go on to a state, then national, round of competition. It's a family affair for us; yesterday my daughter was also coaching a team from the school where she works, and my son was a zebra-striped referee helping run the actual head-to-head trials. 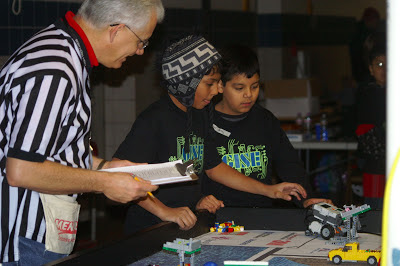 As cities go, Minneapolis isn't as poverty stricken as places like the public school systems in Chicago, LA, NYC. But it still has some some neighborhood schools dominated by families on the lower end of the economic scale, others that are quite affluent, and still others where the student populations are highly mixed economically. So the school district provides bus service and boxed lunches for everybody involved in these events, as there are a goodly number who couldn't participate if they had to provide their own transportation and food.  Rather than allow the richer families to transport their children to and from the events, the schools require all the team members to ride on the same bus to and from their home school to the event location. It's a good policy, I think, and one that keeps poorer students from feeling too different from their wealthier classmates.

Altogether, these are delightful events, with ingenious youngsters devising strategies to compete on an intellectual level. It has much of the cheering and celebrating you associate with sporting events, and the fact that Minneapolis sponsors this kind of academic competition is one of the things I've liked most about our public school system.

During the lunch period, I took a break in the cafeteria to watch the students and the parents who had come to support their little student science stars. We were between rounds of head-to-head competition, and a good many of the teams were taking their lunch breaks.

On one side of the cafeteria, volunteers had laid out the free box lunches for the students themselves—healthy meals consisting of a turkey and cheese sandwich, a small bag of raw carrots, an apple, a small bag of chips. A bottle of water is also provided.

But on the other side of the cafeteria we also sell concessions as a fund raiser for the program—soda pop, coffee, slices of pizza, chips—for the consumption of parents and spectators who attend. And some of the student participants who favor this kind of food and can afford it, will bypass the free boxed lunches and instead buy the pizza slices for their lunches.

At two tables near the middle of the cafeteria was a team from a school that lies on the border between relatively affluent neighborhoods and very modest ones, and as a result this school has a mixture of students. In this particular group were some little boys who were clearly from families who could afford to buy the sliced pizza and Cokes from the concession stand; their boxed lunchs sat untouched on the table as these kids devoured pizza and soda.

But two other little hispanic boys on this team, accompanied by a mother, did not immediately run for the purchased pizza line. From my seat at a nearby table, I watched them eye the pizza being devoured by their teammates and look a little sadly at their nutritious but less trendy boxed lunches, still wrapped in cellophane.

The woman with the boys—likely the mother of one of them—saw their longing, and began to dig through her bag. She eventually found $3.00 in quarters and dimes, enough so that the two little boys could also buy a slice of $1.50 pizza and feel more like other boys on the team. The little boys were thrilled, and happily ran to the pizza line and returned to join their friends.

Afterwards, the young hispanic mother waited a long time until the team members and their parents had gone back to the main gym to continue the competition.  Then she helped clean up the tables, and rather than throw away the boxed lunches that hadn't been touched, she carefully packed them away in a canvas bag to bring home. She also helped clean up other adjoining tables, and when a boxed lunch had been partially eaten and she came upon untouched green apples, these too were carefully set aside to be used later.

She helped for a full hour in the cafeteria, and much later in the day I also saw her helping pack up folding chairs and tables, well after most of the parents had left. It was her way of paying for taking food that nobody else wanted.