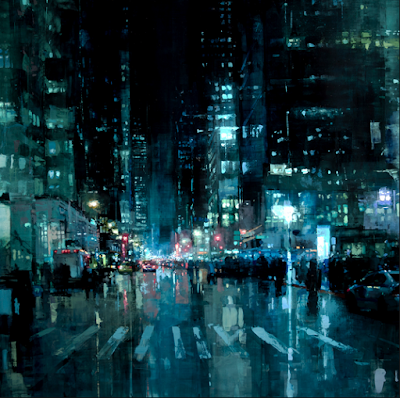 Manhattan, NY is not an easy city to get lost in, since the streets are numbered in an orderly fashion, and with rare exception they run north-south and east-west.  But any city on a rainy or snowy night can pose challenges, and the last three days in Manhattan have been rainy indeed. Tonight after dinner with sales colleagues, I roamed the streets alone for a short time, and soon found myself just slightly lost, a little confused whether my destination was to the east or west side of Fifth Avenue. It was strangely interesting and rewarding to first be slightly misplaced among the drizzle and fog clouding the street signs and familiar landmarks, and to then to find myself back to the Hotel Indigo on 28th St, where a glass of Scotch in the bar with friendly colleagues awaited. There is nothing that leaves a person with such a feeling of basic human competence in the world as to independently discover one's way to any destination—geographical, metaphorical, mental, spiritual.

I read somewhere that some psychological study determined that the reason men refuse to ask directions is because they can't bear to look uncertain and indecisive in front of others. It is a hallmark of leaders, apparently (or maybe insecure leaders) that they never ask for directions.

Maybe so (who am I do argue with USA Today psychologists), but frankly I think there are different reasons I behave this way.  I kind of groove to the low-level excitement of being lost and then finding my way.  The feeling of uncertainty followed by discovery is  pleasing and much more rewarding than if some body tells you how to get there.  And I don't think it has much to do with impressing anyone else, since I'm much more likely to deliberately lose myself when I'm all alone. It's a habit born our of purely private, selfish reasons. When I'm with people, I'm much more likely to ask directions or reach for the I-phone app, because other people sometimes are unnerved by feeling lost.

As a kid growing up in the countryside, I sometimes deliberately headed off into ravines and deep woods, walking for a couple of hours until I had no idea where I was, then try to find my way back home. Mind you, this was rural countryside in southern Minnesota rather than the Pacific Northwest wilderness,  and it was not all that dangerous really, especially if you've grown up in such an environment. I do remember my parents, though, getting a  little freaked out by this behavior.

When traveling on business with a free afternoon with a rental car these days, it's great recreation to simply drive aimlessly, not worrying where I am,  just to see the neighborhoods and businesses and lifestyles in Virginia or North Carolina or Irvine California, or Boston. With enough time before a flight home, there's not much chance getting so hopelessly lost that you can't come back. There is also another profound advantage: you often find things you didn't know existed at all. New restaurants not in any guidebook, hiking trails, public gardens.

There was a time during the early adult years where I was quite lost in ways that weren't geographic at all, but that were phenomenological, philosophical, spiritual—maybe even neurological. Or maybe all those things.  Lost in such a way that for awhile it wasn't even clear that coming back was possible. Oddly, finding a way through that period required that I first embrace being totally, utterly lost.  In any case, in retrospect I'm glad for that experience so long ago. It was as though the universe was offering me a chance to see how lost a person could get and still find a way.

So sometimes the benefit of getting lost is the satisfaction of competently finding your way back to the world you left.  But there are also times when you need to lose yourself in order to push on through to the other side. Which is probably a good thing to remember for Geezers who will become Really Old Geezers, in a future that's not all that distant anymore.