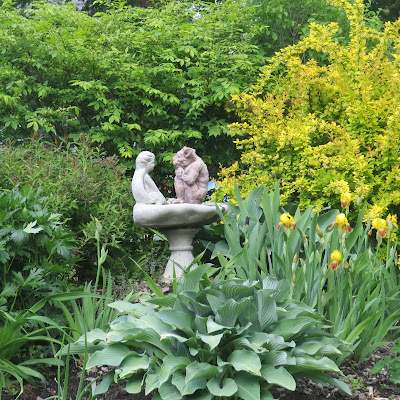 As some of you have gleaned, gardening is for me a meditative tool for understanding things about myself and about the workings of the world.

My level of calm and contentment at any given moment is in almost direct proportion to the time it takes me to get the dirt out from under my fingernails at the end of the day. (A TMI tidbit: repeated vigorous fingertip lathering of the wiry-haired naughty regions during a shower is almost as good as a toothbrush or nail brush for getting dirt out from under the fingernails. Much better than shampooing the more silky-haired noggin.)

But I digress. What I'm observing while now sitting in an adirondack chair in the shade today is how often beautiful things evolve by accident

Several years ago I planted several shrubs in a small front-yard island to form a kind of backdrop for a little concrete birdbath. The intent was to shield the birdbath from the street, but to make it visible   from the house. Among the shrubs there is nine-bark, a flowering spirea, a yellow-leaved barberry, and some other shrub whose name I've forgotten (yes, I'm that type of gardener). There was also a weigela that unfortunately went to that great compost heap somewhere along the way. A clump of volunteer monkshood has grown up it its place—not a shrub, but big enough to be kind of shrub-like in its impact, and also providing dark indigo flowers in the frigid fall, well after the first hard frost.

The little shrub island has languished a little for years, barely acceptable but never achieving the look I hoped. At various times I considered major renovation on the mess, but because I didn't really see in my mind's eye a replacement goal, I just waited. Historically, I've not been a patient man by nature, but ever so gradually over the years I've come to understand that change is inevitable enough as it is. The world changes between each blink of the eye anyway,  so I no longer feel all that compelled to speed change along unless some inspirational idea hatches to drive me to action. "If you don't know what to do, wait until you do," a friend once mentioned to me. And I agree.

As I look at the shrub grove now, though, I find that it has evolved into something resembling perfection, at least for this moment. The shrubs form a solid mass of backdrop leaves shielding the street and framing the little bird bath statues and iris in the foreground. Its foliage colors complement one another in a way that pleases me, especially in that amber light near dawn or dusk. Several little songbird families have taken up within the dense leaves (my favorite is a pair of chickadees clearly nesting within), and a white-tailed rabbit has a den somewhere inside, too. The presence of a rabbit is itself not a happy thing for a gardener who grows lilies or lupine, but the damn little beast makes my wife and daughter smile, and for this moment, at least, the whole vignette produces an effect that seems quite perfect to me.

This is the way gardening has been for me—the way life has been, for that matter. Perfection very often erupts almost by accident out of ingredients that just a little while before were clearly, and sometimes extremely, flawed. Better late than never, patience has become a decided virtue for me as old age begins to dawn. Lacking an inspirational idea to guide, my best decisions have been to watch  and wait until things inevitably evolve into something entirely different and sometimes wonderful. After all, you can always leap into action if things turn to real crap.

Critics will point out that the pleasant little shrub grove would never have happened if I had not planted those shrubs some years ago—an act of deliberate will, and hardly accidental.  True enough, I grant you.  But then I would point out that this present beauty would not exist if I'd rushed into a an act of replacement too quickly, simply because the plantings failed to obey my immediate will.

And it's also quite true that our acts of will don't always get it exactly right. There is still (and always) an element of accident that steers the most deliberate of plans. After all, this little snapshot of perfection I perceive today doesn't exactly resemble that vision I had six years ago.

In my perfect vision, there were no rabbits in the garden, just red-tailed hawks to manage the rabbits.
Posted by Geezers at 8:06 PM 6 comments:

I'm a Geezer, but a relatively young one—a Baby Boomer geezer. I'm not even in the same class as the geezers of the Greatest Generation. Mind you I have some degree of traditional Greatest Generation mentality. I'm known to try and fix things rather than buying new stuff. And I'll sometimes cobble together weird stuff from stuff laying around. I once created for myself a pair of lawn-aeration sandals by taking a pair of old oversized boots, cutting a wooden insole exactly the right side, inserting them into the boots, then driving long nails through the soles pointing downward, so that I could walk across the lawn and drive deep aeration holes into the turf. At the time, this was far more satisfying than spending $40 once a year to rent a lawn aerator.

Still, I don't hold a candle to the old-timers of yore...

We're now in the process of helping my now widowed mother-in-law clean out her house in anticipation of moving from a sprawling country house on a large lot overlooking Lake Pepin along the Mississippi River in southern Minnesota, into a smaller, manageable home in town. My main contribution to this endeavor is do the outdoor repairs, and  to clean out and stage the items from the garage and shed for the upcoming garage sale—the stuff owned and stored by my father-in-law, who passed away this winter at age 90-and-ten-months.

It's a fascinating exercise, as I've learned more about this man than I knew from 40 years of being his son-in-law. But that's perhaps the way it is about any man—if you really want to know him, spend a couple days going through his garage.

Boomer was clearly a fairly obsessive/compulsive fellow, judging from the sheer amount of stuff he squirreled away. While he did not qualify as a hoarder, he was still able to store an enormous amount of strange paraphernalia into a simple two-car garage. Mind you, this was a garage in which he still parked two large Buicks. We now know that when he said he was going out to "clean out the garage," what he was really doing was rearranging things so that more stuff could be stored out there.

For the most part, Leonard only saved stuff that he could envision using some day. A great bulk of this stuff probably created in him a visual image of some kind of secondary McGiver-like role some day. For example, many years ago he somewhere came across what seemed like acres of extruded metal grating, as well as hundreds of feet of galvanized plumbing pipe....which he stored away behind the shed.

WTF?  we all thought. And then one day we drove down to visit one weekend to find that Boomer had built a flight of stairs 60  steps long down from the high bank of his yard all the way down to the lake shore at the base of the bluff. Each step was cut from that rigid extruded metal that he had cut into precise tread size, and the railings were fitted pieces of that galvanized piping.

Rather than throw away an old refrigerator, he put it out in the shed, where he used it as an airtight storage cabinet for paints and solvents.


He was like that, and most of things I've now pulled out the rafters and off the shelves is stuff I can visualize a projected use that lived in his mind. Fifty-five empty coffee cans with lids.....120 empty burlap potato sacks...a huge roll of very heavy reflective mylar fabric....a partial leftover roll of old linoleum from a kitchen installation 30 years ago.

Other stuff was harder to visualize a use for. A coffee can filled with 12 severed heads of golf 4-irons. Where does one get a bunch of 4-irons, and what possible use did Boomer intend for them?

The garage and home has held fully 22 coffee makers, ranging from monstrous 60-pot "event" pots to little Mr. Coffee pots. And fully 12 of these no longer work. But Leonard was a tinkerer, and surely imagined that he would play with the wiring and fix them some day. There is a strange home-made table saw cobbled together with spare parts and an electric motor and welded together by hand. The thing weighs about 200 pounds, but is still entirely functional. A huge bench grinder that built in the same way. 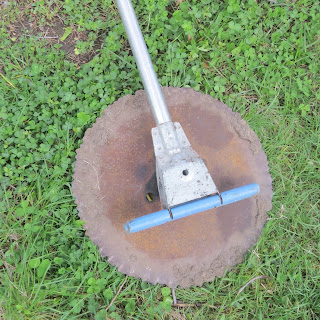 But one item really tells the story of who my father-in-law was. Deep in the back of the shed, I ran across this item, and it took me a minute or two to figure out what I was looking at. Instead of buying a commercial lawn edger, Boomer created his own, by taking a 12-inch table saw blade, filing down the teeth to a workable length, welding it to some kind of metal motor spool, then attaching it to a leftover mop handle he had stored with 20 other discarded broom and mop handles up in the garage rafters, and voila....