Happy Thanksgiving from "Up North"

Thanksgiving is considered a winter holiday in Minnesota—especially in those years where winter is already in full force by Halloween. This year has been fairly normal, weather-wise; no significant snow yet, but it was a brisk 10 degrees this morning with a stiff breeze. All of which makes it all the more amusing to hear the answers I get to a brief exercise in holiday friendliness at the office.

During a morning greeting to colleagues  this morning, I asked an ordinary question: "Is your family traveling anywhere for Thanksgiving?"And surprisingly often, considering that Minneapolis is already the northern-most significant city in the continental US, you get the following answer:

In our land, Up North as as a destination is a proper noun. It's evidence of our heritage as a rural, wilderness culture that quaint little Minneapolis—where you may well see black bears and wolves, and even the occasional moose within the metro area on occasion—is too southern, too metropolitan for most people when they have time off. "Up North" is where so many of us prefer to spend spare weekends and holidays. This is especially ironic to witness in the heart of the cold seasons, when rational people would do everything in their power to head south to warmth if they had the chance. Here, though, if they can't escape to "Up North," citizens at the very least will head outdoors on bitter winter weekends to get in a little snow-shoeing or cross-country skiing, or snow-mobiling (peppermint schnapps or hot buttered rum in thermos jugs is mandatory), or to drill two-foot deep holes in solid lake ice in order to fish (photo, above). 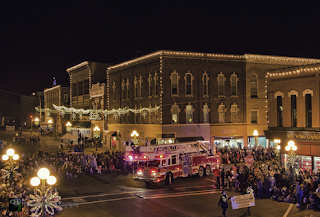 It's quite nuts, and I, for one, am not partaking. My family will be heading south, thank you very much.  A whopping 60 miles to the south, to the place where all the namesake Geezers of these pages were raised. And while in this tropical southern paradise, we'll spend the night after Christmas shivering around bonfires on the streets of our tiny town, watching local damsels parade on floats in thin tights, accompanied by sheriff deputies and civic officials in convertibles and on hay wagons,  while breathing clouds of chilled vapor into the night air while awaiting the ceremonial lighting of the town's Christmas light pageantry.

Nope. None of that Up North stuff for me.

Happy Thanksgiving y'all, from, and to, Geezers everywhere.