A Geezer View of Conflict

—this article contributed by The Professor™—

It seems like a relatively straightforward question, and I have asked it of many people:
Would you rather have a life that is like an interesting play or a boring play?

You can guess the response: out of more than fifty responses over the years, I don’t recall a single person responding: “I’d prefer a life that’s a boring play, thank you very much.”  And of course, it makes sense, doesn’t it? Who would willingly chose to watch, or live, a boring play?
Well, yes, but when thought about further, perhaps it’s not so straightforward.  Interesting plays, as dramatists know, are built from one basic building block: conflict.

If I rephrased my question to ask for a preference between a life filled with conflict and one conflict-free, most people would respond with “no conflict, please.”  The reader can see the paradox of this: the same people who long for an interesting life also—in great measure—hope to avoid conflict through their life.

Why this contradiction?  As a society and as individuals, we are becoming distressingly fearful of conflict.  Not so long ago, a typical day was characterized by low-level conflict from early morning:  (“I gotta go to the bathroom!”—“Wait your turn!!”), through school (“If Christ could hang on the cross for three hours, you can hold off for ten more minutes”—“but I REALLY have to go!”), onto the playground (“I get to be captain”—“You’re always captain!”) Escalating slightly after school (“I told you and your dork friends not to walk on this side of the street!”—“Who’s going to stop us…you and who’s army?), and continuing at supper (“You are not leaving this table until you have finished your supper…think of the starving children in India. —“But they don’t eat Lutefisk in India.”)  And let’s not even play out the ritual back and forth about bedtime.

Like an effective, well-tested and lovingly administered behavioural vaccine, these small doses of conflict helped make us resistant, if not immune, to worries over conflict.  It was something we associated with interesting daily life; we got good at it, and we welcomed it (the last thing we would ever have wanted was an adult umpire to supervise our baseball—how fun would that be? —what would we argue about between innings?)

Fast forward to a different age:

“Don’t worry Jason, there are two more bathrooms for you to get ready in if Tiffany is taking too long.”

“Of course, Joshua, there is no need to ask permission to go to the rest room, it’s a perfectly natural thing.”

On the playground: “Come on everyone, let’s gather for a fun game of ‘circle of friends’ rather than that mean old keep-away.  Does someone have to lose to make us feel like a winner?” (Um, yes, actually.) 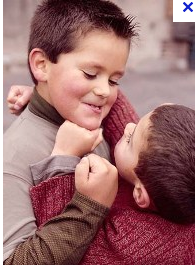 “My dad says I can walk wherever I want, and if you threaten me, he will tell the principal, who has a zero-tolerance bully policy, and you’ll be in big trouble.”

“Well, Melissa, if you REALLY don’t want those beans, I suppose your body just doesn’t need them—my parenting book says if we put an assortment of healthy foods on the table, children will NATURALLY eat what’s good for them.”

It’s important to make one thing clear: no one wants to ignore the horrible and widespread cruelty that can grow up and fester among groups of any kind. That’s not the conflict I’m encouraging.  No one wants people to get tuberculosis either, but the key to containing TB is not administering preventative antibiotics to everyone who sneezes.  There is a point where conflict becomes dangerous or pathological, and as a society we must be observant and deal with it, but insulating ourselves from every day, garden-variety conflict sows the seeds of something more subtle but almost as detrimental: an unconsciously fearful avoidance of conflict of any kind.

I can recall any number of married couples over the years that have said to me or my wife (often contrasting themselves to us): “oh, we never argue.”  I can’t recall, though, many of these people who are still married. Those who are still married and never argue are, with the exception of the saintly—in a word—boring (which is trivial compared to the advanced condition of the disease: unhappy.)

Today’s “confliphobics” may be right: It may be better to work in an environment in which raising your voice when you feel strongly is considered “hostile and intimidating.” It may be more comfortable to have a carefully measured exchange of e-mails rather than a face-to-face conversation.  And perhaps a professionally “facilitated” workshop is superior to gathering for a drink or two after work.

Our workplaces are increasingly populated by generations who have apparently grown up in a way so that even the spectre of conflict prompts avoidance behaviour and perhaps a call to HR services.  Many work environments have evolved in such a way that discourages a person to share what they really think—even if thoughtfully and carefully expressed—especially if they are not a member of a “protected” class of employee.

The geezer in us wants to judge, but how fair is that?  We who have been given the vaccine have little fear of such situations: we’ve built up a healthy supply of conflict-resolving anti-bodies.  But really, pity the poor people who have reached  (chronological, anyway) maturity without developing this protection—without a way to deal with the everyday conflicts that inevitably develop between individuals who are thinking and caring; and who have enough respect for their fellow workers to share what they think. Maybe there is somewhere that everyone thinks the same, and there is no conflict (See: 1984 or Brave New World.)

Another theory, which I ascribe to, is that the only time there is no conflict is when no one cares.  The more one cares, the more probable it is that you will come into conflict with others who care as well.  AND THIS IS TO BE MANAGED (and celebrated,) NOT AVOIDED.  The inevitable conflicts that arise when people care should be valued—it is the sign of a culture that is alive and well.  Yes, it must be treated carefully (like you treat all valuable things), and we all need to work on our conflict-related skills.  We need to continue to practice and strengthen our abilities to turn conflict into art, the way the great dramatists have done for ages.  It’s how we make our lives into an interesting, artful play.
Posted by The Geezers at 9:20 AM 1 comment: