Lost in the Black Forest 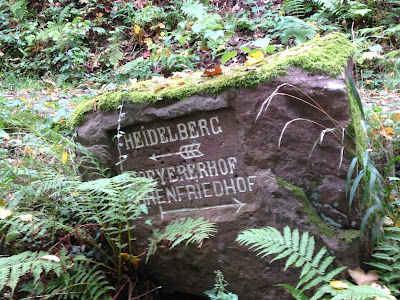 Okay, in the interests of full disclosure, I have to tell you that, as adventure stories go, this one is not the most thrilling you'll ever hear. The forest I was lost in was indeed in Germany, and it was "black" in that it consisted of a large amount of dense, dark fir trees which is what lends the authentic Black Forest its name. It was also black simply because the forest was foggy with mist that day.  But it was not really in the officially designated "Black Forest", which actually lies a little bit to the west and south of where I was lost.

And my being "lost", even, was a rather momentary thing, lacking in heart-pounding drama. From the low mountainside where I was hiking, walking downward would inevitably bring me to the Rhine River, and from there it would be pretty easy matter to walk downstream just a little, where the town of Heidelberg would be found, and where jumping a train at the haupfbohnhof, would very easily take me back to a warm hotel room in Frankfurt. This was not mortal danger I was in.

Still, this was the last adventure of a certain kind that I will have, and so it was worth savoring. There will be other adventures, to be sure, but this is the last one of  this particular ilk.

I was on my free day at the tail end of the enormous Frankfurt Book Fair—the most important trade fair of the entire publishing industry, in which tens of thousands of publishing professionals descend on the gigantic Messe convention center for a solid week of meetings and presentations. On the final free day of the trip, with the last of my scheduled meetings finished, I took the train down to Heidelberg to walk around a bit, first in the old town with its gingerbread architecture, then up onto the mountainside above the medieval castle there. Where I got momentarily lost. In a forest that was pretty black. Where I could indulge in a little mental exaggeration.

Over the years at various sales and publishing duties I've attended in representation of my company, I've frequently piggybacked a personal day, or several days,  to pursue some kind of mild adventure that otherwise would cost me my own out-of-pocket plane fare. I'm nothing if not careful with a buck, and if the job requires me to be some place in the world, dammit, I'm going to make sure to take the opportunity for some kind of little adventure, if possible.

Sometimes that adventure has been very, very modest indeed. Sometimes there's barely time for a drive around the countryside.  Some trips, it's no more than a short visit to some state park or museum I wouldn't otherwise see. Once, it was simply an afternoon hike in a stretch of old-growth forest in southern Kentucky, just after a book launch party for an author. But there have also been more impressive adventures.

I categorically hate Las Vegas and everything it stands for, but the unavoidable trade fairs that have brought me there over the years have allowed me to hike up Red Rock Canyon to Turtlehead peak, where the vistas over the shimmering desert give you sight-lines of 40 miles or so. Another Las Vegas trip saw me rent a car on the final day to drive a couple hundred miles around the desert, along the mysterious Area 51 Air Force test base, through Death Valley, and through the most beautiful prehistoric-looking desert I've ever seen, to the south of Vegas on the road to Henderson. On the best Vegas trip of all, I took three days before the trade show for a three day overnight backpack trip with one of our sales reps (the rare salesman who knows how to shut up) into Zion National Park, beginning in the beautiful sandstone canyons of the low park and ending up in the Ponderosa pines of the higher elevations, where fresh mountain lion tracks gave a certain thrill to camping that night. Fortunately, it was not until the last day that I barely avoided stepping on one of the plentiful rattlesnakes in the park, this one a six-footer with a body as thick as my bicep. Sleeping on the ground deep in the park would have been significantly more challenging if I'd been worried about snakes right from the beginning.

After the London Book Fair one year, I took a few days to head out to King Arthur country to hike, where I climbed the Tor at Glastonbury, wandered among prehistoric Celtic stone worship circles, drank cold water from sacred wells, and slept in a cottage where the owners had placed a large amethyst crystal under the bed for its "energetic properties"  (this was in a particularly "New Age" segment of my inner life).

Another year, I rented a car after the Frankfurt fair and raced down the autobahn and into Switzerland, where on a gorgeous autumn day I hiked well up the base of the Matterhorn from Zermatt, up to the point where I was thigh-high in snow and staring up at the peak itself lying 60 degrees or so above horizontal. The peak was so bright in the thin air that it was positively painful to look at. On the way back down, shaggy, brown-eyed cattle with large bells hanging around their necks stood patiently in high alpine meadows as I stroked their necks.

You might find it odd that I do most of these things solo—my wife, a textbook extravert, certainly does. But the fact is that I never feel so connected to something larger and more universal than myself than when alone with the natural world in some way. It is where I find the presence that some people call God.

Beyond the adventures where the job itself paid for the plane tickets, there were other adventures that the job itself and its modestly decent salary made possible: taking my young kids and wife to Paris and Rome, where my lasting memory is my eight-year old daughter with her head leaned back against my stomach as we both looked up at the Sistine Chapel ceiling in awe; trekking into the back country of Denali National Park with a friend Ive known since the age of four; taking a more sedate week-long whiskey-tasting tour of Scotland with that same friend many years later; having a most wonderful trip with my wife to southern France with another couple (yes, that same friend and his wife) to tour the deep caves where prehistoric humans created the first known art; taking the grown family again to London and Rome, this time with the kids as full adults and in company of their life partners.

Perhaps some of these things would have happened even if I'd worked in a garden center rather than as publisher, but certainly not all of them. It was the necessary work travel, along with a paycheck that exceeded the needs of mere survival, that made these things possible for me.

And so, finding myself quietly lost last week in a rather non-terrifying way on a mountainside 2,000 feet or so above the Rhine River Valley in central Germany was something to be savored. It took only 20 minutes or so of tromping down the hillside to pick up the trail, and shortly after that I came across direction arrows carved into a stone that told me where to go. And in a few weeks the business travel will be done and I'll be moving into doing part-time editorial work from the comfort of my home office rather than on airplanes and in hotel rooms. I'll be working half the hours and experiencing 10% of the stress, and the adventures then will be of a different type, requiring different planning and execution.

So I'm exceedingly thankful for the career I've had over the last 31 years, and for the relative good health that's allowed me to still do these things as the age of 60 approaches. Most Americans, especially those that enjoy a middle class life, are exceedingly lucky folks when stacked up against the rest of the world, and we really ought to reflect on that more often.

Today, I'm reflecting on precisely that.
Posted by The Geezers at 1:16 PM 5 comments: