A Tale of Two Professionals

They are adorably cute, the young professionals who clog the skyways of downtown Minneapolis at lunchtime. Between the ages of 25 to 35 or so, these downtown professionals have a distinct "uniform" that they wear—a dress code of acceptable garb that allows for very little variation, even while it tries to distinguish itself from the dress of the traditional geezer professionals.

For the young crowd, only black will do. The men's suits and the women's business dresses are invariably black for this crowd. For the women, there may be a bit of color offered by scoop neck blouses or leotard tops beneath jet black blazers; and the men may offer a very small bit of color in the dress shirts or ties; but even here, black is so much the fashion that you very often see the dress shirts and ties all in matching black.The young men who work for ad agencies may well let their shirt tails hang open under their suit coats, but this, too, is only a small variation on the costume theme.

Isolate the young professionals from downtown in one room,  and you see more black than you would at a state funeral.

The young men of course often sport those spiky haircuts so much the fashion; and rather than real beards they all wear fashionable stubble, even though I'm told that this is now becoming passe in other parts of the country, where the Ben Affleck full beard is coming into vogue. (Thank God; the scruffy stubble face has been an eye-sore for far too long.) The women enjoy a little more freedom in styles. You see long hair and short hair, high-heels and elegant calf-high boots. 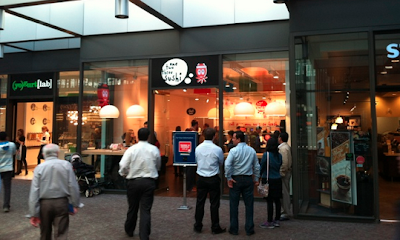 The young professionals are always in a terrific hurry, as they are so new to their careers that 1-hour lunch hour is very closely enforced. They will flock to whatever sandwich shop or sushi counter is most trendy at the moment,  never mind that they might wait in line for 30 minute. And who can blame them? They are there, after all, to socialize with pretty members of the opposite sex, so I see why they're willing to stand and laugh and flirt for 30 minutes.

If they have time after lunch, they will do a little shopping in the high-end department stores in order to prove themselves. In their efforts to grow up, young adults are far more concerned about expensive clothing, I find, than most of the geezer professionals who can actually afford it.

The older professionals who are approaching or are solid members of the geezer years have an entirely different air about them. While I have always been a considerably more disheveled fellow than is the norm, virtually all the older professional workers have adopted a more relaxed attitude in dress and habit. I frequently see a very well-renowned criminal defense lawyer during lunch hours—a guy who gets his choice of whatever high-profile case is underway in the midwest. He's fellow who can quite easily afford $3,000 suits, yet except for the days when he is in court, his lunchtime attire is old comfortable loafers, jeans or khaki slacks, and comfortable baggy sweaters.  Other old guys might be seen in (gasp) corduroy sports coats, cardigan sweaters, or suits that are brown or blue rather than the requisite black that seems inviolable to the youngsters. And they really don't care what anybody else thinks. Eventually you get to a point where comfort is more important than style.

The geezers are generally less frantic and rushed in their lunchtime behavior. They might go to lunch late and dawdle over the New York Times for an extra half hour. They seem far less concerned about the social aspects of lunch. Unlike the kids who huddle and chatter like flocks of sparrows around the sandwich shops, geezer professionals seem to be more comfortable in solitude, or lunching with a single companion at a sidewalk cafe.

They are adorably cute, these young urban professionals. But I'm glad I'm not one of them anymore.
Posted by The Geezers at 6:03 AM 3 comments: