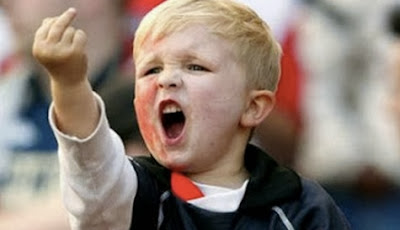 I'm sure they boy described below falls under the category of "troubled" youngster, and if I knew the whole story I'd be quite sympathetic with the plight of the family. Still, I can't quite help having admiration for the ingenuity, even brilliance, of this youngster's brand of juvenile delinquency....

Last week, a nine-year-old boy in Minneapolis snuck onto a Delta jet bound for Las Vegas. At first I assumed this was some sort of innocent but startling mixup—that he was traveling with his family, who was waiting to board a plane at an adjoining gate, accidentally boarded another plane, or some such thing.

But it turns out that this was quite a clever and well planned ploy on the boy's part. His mother works at the airport, and it would appear that he sometimes accompanies her to work. A day or two before the event, airport cameras recorded him "casing" the situation at the baggage carousel and security gate. Then, on the day in question, he quietly joined the rear of a large family at the security checkpoint and a different family at the boarding gate. In the confusion of a family elder presenting a whole handful of boarding passes to the agent in each location, he managed to sneak through. After all, the difference between 8 kids and 9 is negligible to the typical adult. It wasn't until he was on the plane in the air when the flight attendant realized he was both unattended and not on the flight manifest.

And mind you, this kid is old beyond his years: his chosen destination was not Disney World, but Vegas.

When the lad was eventually returned to Minneapolis, local authorities looking into the situation found that he has a history of this kind of misbehavior in Minneapolis, often jumping the light-rail train line to travel down to a water park near the Mall of America, where he sneakily joins large family and slips through the entrance lines there. He is, to say the least, a behavioral challenge.

Now, as a youth I had something of a reputation for being both clever and prone to notable hijinks. But at the same time I extend sympathy to his family for what they must go through, I must  tip my cap to the sheer precociousness of this young fellow. Intellectual brilliance and diabolical cunning is a hard mixture to beat.  If he gets through his delinquency years and stays out of prison, I'm confident that he has a future in the US Congress.

You can read the entire story here.
Posted by The Geezers at 4:58 AM 3 comments: