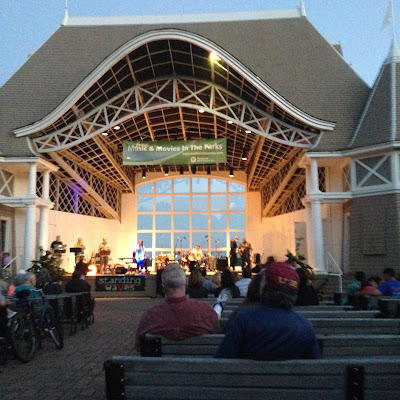 Maybe it's because my left knee is throbbing tonight, or maybe because the time of day reminds me that a good friend a couple of thousand miles away is likely at this moment under a radiation machine getting zapped for cancer treatment. Whatever the reason, as I sit at the Lake Harriet band shell watching a free outdoor evening concert, I find myself musing about the various injuries and wounds and illnesses that are part of the human condition.

My recent goal  to walk the length of every street of Minneapolis over the next few years is off to a steady but slow start, hampered by a leg brace protecting my surgically repaired knee. On most days, I go to a neighborhood somewhere in the city to walk a bit toward the overall goal. On this day, the last few hundred yards of walking involved Ms. Mercurious and I walking from our parking spot to the outdoor band shell on the shores of a pretty city lake beset with sail boats cruising in the early evening light. After a day of activity, the knee is now communicating with a rhythmic throb—not angrily, but just letting me know its feelings on the matter.

There are plentiful signs among the audience members that I am by no means alone in having a physical challenge, which in my case is only a temporary thing.  Off to the right, a young woman wears a plastic boot over her lower leg, possibly recuperating from a bone fracture. Up at the front of the seating area, a couple of people are in wheelchairs—whether due to injury or chronic condition is not entirely clear. To our left is a fellow with his left arm and shoulder in a sling. Elsewhere,  I spot a variety of canes and walkers and other assistive devices. The free concerts draw a lot of geezer patrons;  I feel right at home here. 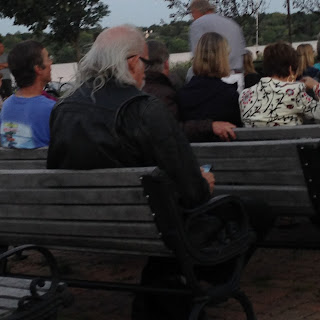 For some reason, my attention is especially drawn to a man sitting ahead a few rows and off to the left.  There is something weary and a little forlorn about him. He is about 70 years old and has the appearance of a former club biker winding down after a hard life. He wears a somewhat battered black leather jacket, and his shoulder -length white hair hangs, curtain -like, from a head that is entirely bald on top. His white beard is now carefully trimmed at the neck and high on the cheeks, but I imagine that back in the day it may have a ferocious thing, a full and prickly bramble. From his sleeves I can see signs of indeterminate tattoos peaking out.

The man does not look overtly unhappy or irritable, but neither is there any expression of contentment or happiness. Most in the crowd, even those sitting alone, are slightly smiling at being part of a crowd listening to pleasant music on a truly wonderful, cool summer night, but this fellow’s expression is blank and best described as resigned and perhaps just slightly morose. I notice that his right leg is slightly shorter than his left, as evidenced by a thick-soled orthopedic shoe on that foot. Is this a congenital problem, I wonder, something that has made him feel different since childhood, or is it the result of some serious motorcycle accident? My imagination, as always, tends toward the dramatic explanation  In any case, I am slightly concerned for his seeming lack of joy tonight.

I glance around the crowd, again taking in the individuals here and there with signs of injury or chronic disability. I am of course only spotting the individuals with obvious visible signs. Many, many more people in the crowd likely have invisible problems or traumas, current or historical, that can't be identified by sight alone. We are all very much alike in this respect. 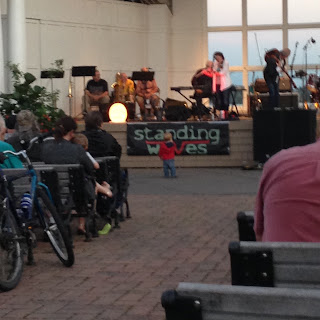 About the only people who do not yet have some form of wound or pain may be the little kids playing about the aisles and the space in front of the music stage. Some of them have those magic sneakers that flash neon lights in response to some strange generating machinery in the heels; their feet flicker in the night like high-tech fireflies. When the kids got too rambunctious, some of the parents rein them in. I wish they parents would simply let their kids dance.

One pretty little dark-haired girl in a sun-dress pirouettes in circles with her arms clasped together behind her back, and on each revolution her broad smile reveals deep dimples in her cheeks, evident even from thirty feet away in deepening darkness.

In the right mood, I sometimes get a precise sense of what a child will look like in old age, or what an adult likely looked like as a small child.  It's as though I see people as lenticular portraits—as toddler, teenager, old-timer—all at the same time. In this little girl dancing to the music, I now see early echoes of an adult I know. When she was a youngster, I'm sure the woman I'm thinking of looked and behaved a lot like this little dancing girl by the lake.

Even these apparently carefree kids, though, will eventually know some woundedness, if they don’t already. It is an unavoidable part of life. 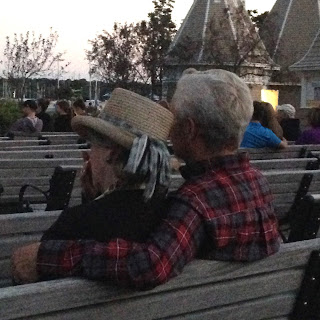 If you think all is a slightly depressing thought to have on such a night, you'd be quite wrong. My mood tonight is not at all melancholy. Instead, I find something reassuring  about the observation, as it seems to me that our shared experience is what unifies the crowd tonight. It is our ability to accept and transcend ordinary human pain and frailty that has brought us all here tonight to enjoy the music and the evening. In the final measure, music, art, and other forms of social communion are really a means of both articulating, and rebelling against,  human limitation.

A sentient being, the mystics will tell you, is any creature who is capable of suffering. On this night, we are all gathered for a free concert in the park as sentient beings, quietly and elegantly sharing the discomfort and the related ecstasy of the human condition. 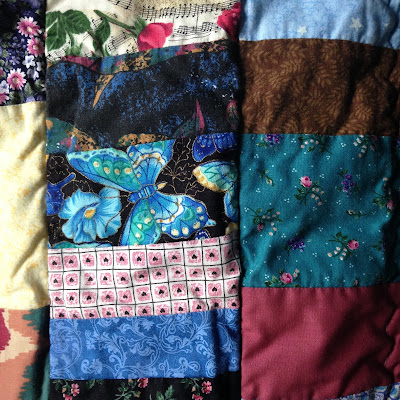 It is a cool night, and Ms. Mercurious senses that I’m growing chilly in my shorts. She was wise enough to wear long pants. As she extends her lap blanket to over my bare leg,  I glance down, and realize that what she has offered me is the colorful quilt that my father-in-law was given as a patient undergoing treatment in the hospital for a terminal illness last year. After he passed away early this year, my wife adopted this blanket as a warm remembrance of her dad. This is the blanket with which she now covers my scarred knees, and the warmth it gives me is as much about its symbolic value as its colorful cotton threads.

As the song ends, the aging biker applauds softly with genuine appreciation. He stands up, and with a slightly arthritic groan he walks past me out of the amphitheater. Our eyes meet as he walks by, and I see he now has a quiet smile on his face.