In recent years, my addictive reading habits have shifted from fiction to non. This is partly because modern fiction is so wrapped up in its own style pretensions that it no longer really tells stories. With rare exception (the novels of Jeffrey Eugenides come to mind), most novels stop surprising you about half way through. So the last decade or so has had me reading much more fine non-fiction, which is actually considerably better these days than ever before. So here are ten great choices for the readers among you.

The criteria for making my list are these:  First, they are by authors who are not one-hit wonders—if you like this recommendation, you can safely grab other books they've written and be equally entertained. Second, these are works of non-fiction that actually tell stories and draw fine characterizations, the way novels once did. And finally, this list includes mostly books written over the last 10 years or so, and therefore leaves out classics such as the works of Thoreau, Mark Twain, Muir, or even John McPhee or Edward Abbey, the latter two who are among by favorites but have now entered "classic" designation in my eye. So I've limited this list to a list of more or less current good books.

In no particular order:

• All Over But the Shoutin'.  Rick Bragg is a former Pulitzer Prize winning feature article writer for the New York Times. This book on life growing up poor in the deep south is one of the most moving things you'll ever read. Bragg's voice is melodic and precise,  and fearlessly self-revealing. Technically a memoir, but really a cultural study of life for dirt-poor white people in the southern U.S.

• The Forever War, by Dexter Filbins. Filbins is another Pulitzer Prizewinner, a war correspondent for the New York Times. This collection of feature articles chronicles the gulf wars over the last two decades through heart-wrenching stories of the soldiers and civilians affected by it. Impossible to describe just how well written these pieces are. Few books have moved me this much.

• Blind Descent, by James Tabor.  This is the story of two world-class caving teams, simultaneously trying to find the deepest spot on earth in caverns located thousands of miles apart. The tales of how deep-cave explorers do their thing is more suspenseful than the best crime novel. If you have even a hint of claustrophobia, this book will make it hard to sleep.

• Spillover, by David Quammen. Normally known for his short essays on subjects of natural history, this is Quammen's full length detective story on how deadly infectious diseases throughout the world are investigated and defeated. You'll not think the same about bats after reading this. The finest book of this genre I know.

• A Short History of Nearly Everything, by Bill Bryson.  Anyone familiar with Bryson's comic travel writing will be surprised and delighted by this easily accessible introduction to the wonders of everyday science. Written not for the science buff but for everyday folks. Who knew just how eccentric Issaac Newton really was?

• Fly by Wire.  It's tough to pick just one book by William Langewische (American Ground is another obvious choice).  This book is the tale of the Airbus splash-landing in the Hudson River a couple of years ago, telling the story not only of the pilot, Capt. Sullenberger and his crew, but also the story of the entire airline industry and the politics and workings of the air safety program. Fascinating read, but best not to dive into it just before your next business trip, unless you're positive to be flying on an Airbus.

• Unbroken, by Laura Hillenbrand.  Yes, I know this is old news, as the book's been on the best-seller lists for years now.  But yes, it's every bit as good as that. The epic real-life adventure of Louis Zamperini, a juvenile delinquent turned world class runner turned POW turned spiritual convert. Here's the rare book that really deserves its run on the NYTimes best-seller lists. 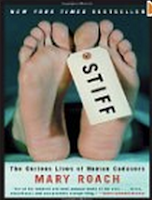 •Stiff, by Mary Roach.  Somewhat like Bill Bryson, Mary Roach writes light-hearted, funny but well researched presentations of various scientific subjects. In this one, the subject is death, or more precisely, corpses. Delightfully gruesome but fascinating. Also read Mary's other one-word books:  Gulp, Boink, Spook, and also Packing for Mars. Equally great books, each of which can be read in a couple of sittings.

• Hidden America by Jeanne Marie Laskas. The subtitle of the book tells it all:  From Coal Miners to Cowboys, an Extraordinary Exploration of the Unseen People Who Make This Country Work. Imagine a smaller, more up-to-date version of Stud Terkel's Working, and you get some idea of what's at work here. In-depth interviews and profiles of folks who work at mundane and sometimes unpleasant jobs that are utterly necessary to the working of the economy.

• Homicide, by David Simon.  TV buffs among you might recognize David Simon as the creative force behind the HBO series, The Wire.  Homicide is an early book by Simon, the accounting of a year spent following a homicide unit in a notorious Baltimore precinct. Will eventually be seen as a classic.

An honorable mention:  The Unwinding, by George Packer.  This analysis of the recent collapse of the banking/finance sector of the American economy is on the short list for winning this year's National Book Award for non-fiction. Could well make my next 10-best list.