This is as big a surprise to me as it is to anyone. Over the course of my life, all pleasurable shower and bath experiences I've had,  both in fact and in imagination, have been with members of the opposite sex, not my own. Over the years, I've showered and bathed occasionally with my wife, as well as people like Susan Sarandon, Grace Kelly, Sophia Loren, Julie Christie and even, once, Scarlett Johanson (....fact AND imagination, remember) and found it to be great good fun in each case. At no point did I ever enjoy showering with, say, George Clooney.

So it's somewhat surprising to find at this late stage in life that I actually enjoy showering with my fellow men, at a time when nakedness around ANYONE should be a little intimidating.

In January, with incentives both from my health insurance provider and from my employer who has begun to match the insurance company's credit, I joined the YMCA again. It was not without trepidation, I will say. Now approaching 60, I am nowhere near the physical specimen now that I was 30 years ago—or even 10 years ago, for that matter. I am most certainly on the plump side, enough so that it makes my doctor chide me;  and I really, really think twice about going shirtless at the beach or to mow the yard. I no longer impose that indignity on the public; they've done nothing to deserve that spectacle.

It's not that I was ever Adonis, but back in high school and college I was moderately athletic and maintained a fair amount of activity into my 40s. There is nothing about me that has ever been the legitimate source of excessive naked pride, if you get my drift, but there was a time when I was above average in fitness, and I certainly didn't feel at all ill at ease to be seen naked back then (except perhaps if a Catholic priest happened to be somewhere in the area).

But that's  most certainly not who I am now, and so it was with trepidation that I considered getting back into the gym, taking my clothes off in the locker room, showering openly with other human beings. (In recent years, I tend to hide my eyes if walking in front of the big bathroom mirror alone in my own home). I am just plain shy in the best of circumstances, and am now decidedly insecure about my middle age paunch, which is now pronounced enough that I have to crane my neck forward and down to inspect.....things.

But much to my amazement, I am finding the locker room rituals to be quite relaxing, and not nearly as awful as I expected. For one thing, there wasn't the expected hoard of healthy young guys to contrast with my decrepitude. This is the YMCA, after all, and the vast majority here are old geezers like myself with sags and wrinkles that are at least as pronounced as my own. (Actually, at most times of day, I'm younger than the median age, I think). 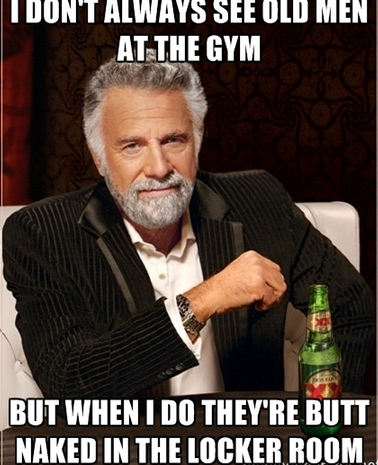 To my surprise, it's rather freeing to let it all hang out with a bunch of men of middle-age and beyond, because there is no way to hide and hence there is nothing but open acceptance here, really. Amusement and good-natured conversation abound, and the whole atmosphere makes me look forward to retirement, when I can spend a couple of hours a day at the gym rather than the frantic 60 minutes afforded now. (And um, no, it's not that I want to spend that full two hours each day being naked.)

At no time is the locker-room amusement more pronounced than when some 20 - 30-year old arrives with his carefully razored torso. This hairlessness of body is all the rage among young adults these days, I know, but men are supposed to be hairy beasts, and the rest of old guys can't really resist smiling at little when some some young metrosexual enters the shower room with his cold and exposed pet salamander. Open laughter has been known to occur, because we older guys would never think to trim the shrubbery. It's ironic that the men who experience embarrassment in the locker room aren't the old sagging codgers, but waxed young men painfully aware that they're the source of amusement to their elders.

One old fellow, a urologist, had fun one day by casually mentioning to another old guy in the shower room that he had ordered a patient's penis amputated last month due to gangrene. He explained, loudly enough for an unsuspecting hairless fellow to hear, that shaving the genitals can lead to ingrown hairs that can become infected and lead to devastation. (This is, I later learned, a true problem). The young man paled and scurried quickly from the shower room, nervously glancing down at his plumbing.

The greatest of all sources of amusement is when somebody who is older, who ought to know better, shows up with his chest and naughty bits all plucked, shaved, waxed and otherwise denuded. No clearer sign is there of mid-life crisis than when a mature fellow tries to act young in this most private of all ways. When somebody like this enters the shower room,  dead silence reigns as all the oldsters bite their cheeks to avoid laughter.

I'm sure all this would be different if this were an LA fitness, where I most certainly would be out of place. If fact, I understand that at the more chic gyms, or even at YMCA's with a younger clientele, the young men are rather appalled by the ease with which older guys will walk around and talk while buck naked (see this quite funny article written from that perspective).  But this is old-guy YMCA, after all, and here I find it just fine to shower with naked men, where everybody laughs about the foibles of the young and takes delight in making them uncomfortable.

Who knows, I may even start mowing the yard topless again. Let the neighbors beware.
Posted by Geezers at 1:21 PM 9 comments: