Like a lot of people who spent their youths in and around farms and farming culture, I have a bit of distain for the paranoia with which most Americans view ordinary microbes, the obsessive concern with cleanliness so rampant in America.  And there's some justification for this: one theory as to why there is such a high incidence of asthma, allergies, and intestinal problems is that people today are too clean, and don't have healthy mixtures of normal everyday microbes and bacteria. It's been shown for example, that farm kids have relatively few instances of asthma, and the reason is that their systems are more robust through lifelong exposure to animal and soil microbes. The people who get flu regularly always seem like the same people overly concerned about hand-washing and general cleanliness. 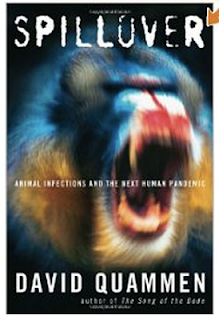 But reading David Quammen's Spillover has given me a bit of a chill. The next time I vist a farm or zoo, I'll likely be a little more likely to wash up after scratching the critters under the chin.

Quammen's book is a series of case studies of the epidemiology of various cases of zoonotic illnesses—viral diseases that start in other species and spillover into human populations. Like Richard Preston's Hot Zone (though featuring better science) or Laurie Garret's The Coming Plague (but narrower in focus and more up to date scientifically), Spillover is a fascinating and chilling study of the dynamics by which viral diseases arise in human populations and are identified and combatted by disease control experts.

The book examines many of the diseases with current buzz in popular culture, including HIV, avian influenza, swine flu, and ebola. Contrary to popular opinion though—which is that our courageous scientific community can find the answers to most of these problems—the message coming through is the rueful acknowledgement that for a great many of these diseases, we really know next to nothing about the original hosts of the diseases, not have any real idea of how to control them. Ebola virus, for example, has entirely decimated large populations of chimpanzees an gorillas in many forested regions of Africa, and is 75% fatal whenever it spills over into humans, yet we know absolutely nothing about whether it originates in bats, or birds, or insects, and we know almost as little about how it is transmitted.

A highly recommended book, to be sure, though one that might keep you up nights.

By the way, whenever you are looking for a good book to read, I heartily recommend looking up any list of National Book Award nominees from a recent year. Invariably, you will find excellent suggestions. It is a far better predictor of fine reading than, say, the NYT best-seller list.
Posted by The Geezers at 6:52 AM 5 comments: