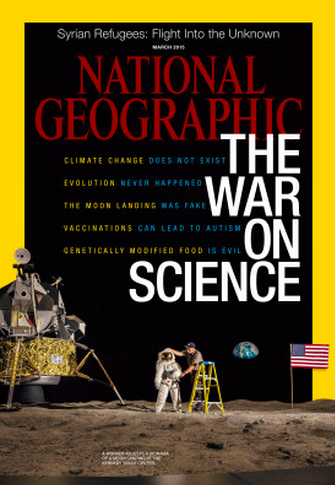 A recent edition of National Geographic magazine had as its cover story a lengthy essay entitled "The War on Science," in which it analyzed and derided the various anti-scientific and pseudoscientific theories that today are found in such plentiful numbers—such as 'the moon landing was faked,' and the view that global warming is some kind of liberal plot. And the granddaddy of wackiness: that evolution is a "theory" and that creationism is a viable alternative theory.

It is said that only about 50% of Americans believe that evolution and natural selection is the real deal. The Nat Geo essay is presented, predictably, with a slight air of condescension, as is fitting for a magazine that is dedicated to the popular science demographic. "Look at those poor dummies who don't believe in the holiness of science."

What is missing to the article, and to the modern discourse, is any acknowledgement that there may be some reason to doubt science.  I wonder, sometimes, if the wacko extremist anti-science folks exist simply as a balance the extremism of the opposite side. I would argue that those who worship science may be just as misguided as group who believes that the moon landing was held on a sound stage in Arizona.

Except that it really hasn't at all, and the history of science is really the history of "truths" that are gradually proven to be, at worst, utter horrifying falsehoods, and at best, incomplete but useful premises. Scientific "truths" have been steadily overturned throughout history. At one time alchemy and astrology were declared to be scientific truth. Steadily, such ridiculous ideas get overturned, and even now on a daily basis, beliefs formerly held as truths are abandoned or revised.  If there is an 'ultimate truth' out there, science by no means has found it. Consider some examples:

Einstein's General Theory of Relativity began its development in 1907, and 108 years later science really doesn't fully understand the nature or behavior of light and matter. Intense debate rages among different factions in the world of quantum physics, even among such basic questions as whether light is a matter or energy.

In the early 50s, highly trained doctors, priests of science, believed that Tholidomide, a drug being used to combat certain respiratory infections, should be used off-label to combat morning sickness in pregnant mothers. They were scientists after all, so of course they had the truth.  The result were tens of thousands of babies born with horrifying birth defects of their limbs. Many of the photos are almost too awful to look at.

Just today, in the science section of my morning Sunday newspaper, I learn that the most up-to-date studies show there is no statistical validity to the belief that fish oil supplements laden with omega-3 oils have any benefit toward reducing the chances of stroke or heart disease. In the same newspaper: no evidence that eating apples really does anything for "keeping the doctor away." Just last week, mind you, my general practice doctor reminded me to take my fish oil supplement. But he no longer insists on PSA testing—such is the speed with which scientific truth changes.

Other modern medical wisdom currently under review as possible bunk:  that cholesterol is a form of poison in the system (some people who reduce cholesterol seem to be at more risk for debilitating arthritis); that a baby aspirin consumed once a day offers protection against anything at all. The small scientific truths that are debunked daily are too legion to count.

Evolution, while of course explaining how species develop and change and "self-select" due to their suitability to the conditions in which they must live in,  is now recognized to be slightly incomplete as a paradigm.

The pure theory of evolution is that it's a matter of pure accident—species who happen to be born with a mutation that proves beneficial have a better chance of survival and passing along those beneficial genes.  Yet it appears that the development of species often happens much faster than would be the case by mere genetic accident. Can you really explain the rabid change of the human species from cave-dweller to  audience members at Copeland symphony in a mere 20,000 years?

So it's now proposed that there is a mechanism by which current conditions, and even free will, can actually change your genes in mid-stride. The genes you had as child may not be the same genes you have 25 years later, when you conceive your own children. A person abused as a child may actually have their very genes altered, as do those of a child leading an enriched early life. The implications of this are enormous. Evolution may not be entire matter of pure genetic accident, but may actually have some overtones of karma and even willful intention.

If this is so, then evolution, as is the case with every other scientific "truth," may be be an idea that is itself be still evolving.

Truth, by its definition, is a stable, non-changing thing. What is often called truth, by Francis Collins and others, often proves itself to be just another temporarily useful fiction, subject to steadily changing revision.