Frank is a common though infrequent passenger on the morning 4F bus into downtown Minneapolis. In his mid 60s, Frank gives the impression of a somewhat borderline existence—not homeless exactly, but living on the fringe of mainstream culture nonetheless. His grey hair is longish, a little unkempt. His stubble beard comes and goes, but he seems not to shave religiously; whole weeks go by sometimes in which the stubble grows unchecked. His standard clothing includes boots, faded demin jeans, and a demin jacket that is several shades more faded than the jeans. He very often gets off the bus at Lake Street, and as he wanders up the street as the bus pulls away, his destination seems aimless. 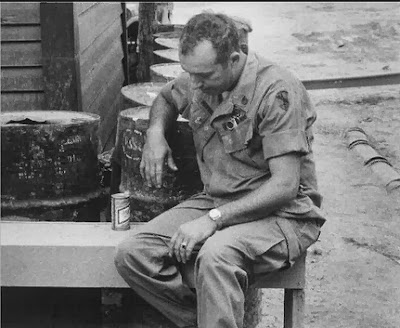 I see him often, but not until today are my assumptions about him substantiated. When he sits directly in front of me today on the bus, I notice that the adjustment band on the back of his red baseball cap had a single word printed on it: "Veteran."

During my teenage and young adult years, my country's war "du jour"  was the Vietnam War (ridiculously, the official policy wonks tried to tell us this was just a "conflict", not a war). Conflict or war, this event influenced the atmosphere of those years like nothing else before or since. Without any proof at all, I would have bet money that Frank was an armed forces veteran of that conflict, because the wearied, cynical look he carries with him is one I've seen many times in the men who participated in that war in the 1960s and early 1970s.

I am slightly too young (and probably too cowardly) to have served even if my luck had been awful, but I have friends and acquaintances who served. And I did have a draft card and a lottery number when I was a senior in high school, before the war ended in the early 1970s, much to my enormous relief, so the war was certainly a big part of my psyche, my country's psyche.

Although the early decades of this century have seen ongoing military conflict in Iraq and Afghanistan, there's been something much different about those conflicts when compared to Vietnam. These recent wars have not dominated the moods and conversation of my own kids the way Vietnam did for us, for one thing.  For us back in the day, the war was nearly as important as sports and sex, and almost no day went by that we didn't talk about and argue about the events of southeast Asia. The 6:00 pm news in the evening, with its daily body count, was watched as intently as any network situation comedy.

No such obsession occurred for my own kids as regards today's global conflicts, even though they are the same age as I was at that time. And it's not as though my own kids are apolitical. My daughter, especially, has a very high level of political awareness. The fact is that Vietnam was simply different as a cultural phenomenon, occupying a position in the national psyche different than any conflict before or since. WW 1 and 2 were somewhat noble wars where we felt like we were fighting legitimate evil. And although there is rightful cynicism about the Bush- and Obama-era conflicts, the fact that they were (are) being fought by a volunteer army puts in in a different category than Vietnam, which was fought mostly by drafted conscripts forced into service.

To this day, a group of Vietnam vets participating in a civic parade or other public event has a different air about them than that of Korean vets or gulf war vets, or the handful of old men still living from World War II and able to march in parades.  At the last Veteran's Day parade I saw, when the Vietnam vets paraded by, they were dressed in their informal combat gear rather than dress uniforms, and sported long hair, beards, and very often a kind of defiantly outraged expression, even now, 40 years later.

And it's something of a national tragedy to recognize how many of our older homeless and indigent men trace their roots back to the Vietnam war. If you pay homage to the Vietnam war memorial in Washington DC, you very likely will pass by homeless Vietnam vets sleeping on park benches or in the parks; and you may find small groups protesting their societal treatment right in the shadows of the noble monuments of the national mall. Most bear the same look that Frank of the 4F bus does, just to a greater degree.

While all war veterans are often reluctant to talk about their experiences, the Vietnam vets I know are singularly close-mouthed about discussing their experiences with anyone not sharing similar memories. I worked with a close colleague for several years before he confided that he'd been a Vietnam veteran, and this even though he'd never been in combat at all but had served instead as a PR journalist. There is a mixture of embarrassment and fierce anger in many of the Vietnam veterans I've known personally. I've met and know at least six veterans who saw infantry or airborne combat action in Vietnam, and while they will openly talk about intensely personal matters involving family or marriage issues, not one of them ever has talked about combat experiences.

I am stereotyping Vietnam vets, I know, and I apologize for it. It won't surprise me at all if some readers of this essay become very angry at my depiction, and point out that the vast majority of vietnam vets aren't traumatized at all. They are undoubtedly correct about this.  But in all honesty that's how society thinks of Vietnam veterans as a group—as a demographic abandoned, demeaned by their culture, and rightfully angry about it. The perception, whether accurate or not, is its own reality.

I very much hope our current group of emerging war veterans from the Gulf conflicts manage to avoid the same treatment and fate seen in so many Vietnam vets, as well as the stereotyping with which we clothe them.  But given the long, long length of the various Gulf wars, and modern medicine's ability to salvage seriously injured and even brain-damaged soldiers, I fear that 40 years from now, the plight of war vets as a group may be even worse than those of my contemporaries.

Recently I spent many hours at our local VA hospital as my father-in-law, a WW II vet, had heart bypass surgery, and in the waiting rooms and cafeteria,  I was struck by the enormous number of young vets under the age of 40 who bore the early traces of the haunted look you now see in the faces of some Vietnam-era veterans.

I can't help but wonder if 30 years from now we won't see a far larger group of traumatized veterans struggling to find a place in a society that is embarrassed to acknowledge its own failings. Such an outcome seems possible unless as a matter of policy we treat this group better than we treated the Vietnam vets who served us in the 1960s and 70s.
Posted by The Geezers at 7:27 AM 3 comments: