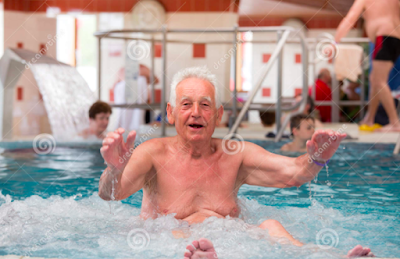 I had only been in the whirlpool for a few minutes after my afternoon swim when a new fellow, Douglas appeared. I know many of the other old men who visited the YMCA in the afternoon, but Douglas, about 60 years of age and exceedingly fit, was new to me.

I was alone at the time, so when Douglas soon began a rather peculiar behavior, only I witnessed it.

After a few minutes of routine soaking, Douglas announced that he was going to submerge himself entirely, but reassured me that he would come up again. This was a bit puzzling to me, since I’d never seen a grown man do this in the whirlpool before. But I shrugged in nonchalance—each to his own. I figured perhaps Douglas wanted the benefit of the whirlpool jets directly on a sore neck, or something similarly benign.

But I wasn’t prepared for the fact that he was planning to submerge for rather lengthy periods of time. On the second plunge, I watched the second hand on the wall clock approach close to 2 minutes before the guy came up for air. I was, in fact, almost ready to go down after him when Douglas finally did come back up.

A few minutes followed during which Douglas recovered from his adventure. On the third dive, Douglas had only barely submerged himself when Frank came out of the locker room door and climbed into the pool. He would be the third guest in the water, though he did not yet know it.

The turbulent surface of the pool, along with a fair amount of foam, pretty much hid whatever was under the surface, and so Frank had no idea there was a third inhabitant lurking below. I suppose I could have warned Frank that the pool, in fact, held three souls, but I confess to feeling a little impish at this point. I was rather looking forward to the sudden emergence of  Douglas from the depths, just as Frank had settled in for a relaxing soak.

What I did not expect, though, was that Frank would sit directly on top of aquatic Douglas. But so he did. A most entertaining melee ensued as Frank shot up and out of the pool, having sat directly down on a large mass of soft, living organic tissue lurking in the depths.

It could not have been more fun for me if it had been the creature from the black lagoon, rather than merely Douglas, who now sheepishly climbed out of the pool with an apology to Frank.  Frank, for his part, was literally speechless for several moments as we watched Douglas exit to the locker room.

Once things settled down, I also apologized to Frank, acknowledging that while I had been looking forward to the seeing his startled expression when Douglas rose up out of the water, I by no means expected that Frank was going to sit directly on top of him.

Fortunately, Frank had a sense of humor himself. “You would tell me, wouldn’t you?” he said, “If there are other people down there?”
Posted by The Geezers at 3:59 PM 7 comments: