Teenager on the Internet, Part II

This story link provides an update to story recently posted about a teenage boy who posted an off-color joke/lie about being in a sexual relationship with a young female teacher:

In my previous post, I suggested that a public apology on the lad's part might do a lot to undo the damage, and indeed that's what's now happened. It occurred at a carefully staged  official press conference attended by not one, not two, but three lawyers representing the family, giving credence to my suspicion that this thing was now being orchestrated by lawyers sensing PR possibilities.

The end of the story has one of the family lawyers calling the school superintendent and chief of police "imbeciles" for levying the school suspension and suggesting that the kid's action might be a serious crime.  And there's now the hint that the family's lawyers might seek some sort of law suit against the school for mental damage caused to the boy by the "overreaction" on the part of school officials.

Back in the day, such an event would have been handled quite simply and maturely by a responsible parent marching the kid into the principal'[s office, calling the young teacher in, and having the boy apologize for being such a dumb-ass. But now in the day of on-line public dispersal of information, news media dying to create stories, and lawyers seeking talk-show publicity, this is what we've come to.

As the old joke goes, "What do you call 100 lawyers at the bottom of the sea?"

The Internet is Not a Video Game

An open message to kids and young adults who haven't yet got the message:

Facebook, Twitter and all other forms of internet-based social media exist in the real, adult world of cause-and-effect consequences. They are not video games from which you can punch the "reset" button if you don't like what's happening.

In the most recent local example of this, a popular young student-athlete in a nearby suburb of Minneapolis has been charged with a felony after he posted a comment on some kind of "confessional" web site where he stated he was having a sexual relationship with an attractive young female phys. ed. teacher in his high school.  He now claims this statement was meant facetiously, sarcastically, as a comment of the absurdity of what was transpiring on this web site. (That's possible, I suppose, but it frankly smacks of the kid's attempt to bluster his way out of big trouble.) But the consequences of his action involved the quote being distributed via Twitter to hundreds of people, which in turn lead to school administrators and police interrogating the bewildered gym teacher to her great humiliation and embarrassment. Once it became clear that the stories were entirely bogus, our young high schooler was first expelled from school, and now potentially faces felony charges for the harmful effects of his actions.

As my wife and I discussed this last night, we agreed that the problem here is that internet technology is really built by and for people who view it all as some kind of game and not part of the real world. When you hear hackers talk about their actions from prison cells, for example, they generally talk about not viewing what they did as real crimes, but just as interesting intellectual games they played against financial databases and national security web sites. Nobody seems to realize that the internet exists in a real adult world where actions have consequences.

I recall from our high school days both a very attractive female gym teacher and a couple of female academic teachers who were 6 or 7 years older than we were at the time and who were the subject of jokes and innuendo, too. But the difference between 1972 and today is that back then we whispered our distasteful jokes to a cafeteria table of five or six close friends. We wouldn't have dreamed of broadcasting  boastful lies to the entire school through the loudspeaker system. But in a world of Twitter and Facebook feeds, today's kids and young adults are broadcasting their every thought to the world at large. All internet-based communication applications should come with the following warning: "Say nothing that you don't want the entire world to hear."

The fact is that this single event, even if it was entirely innocent, will now follow the young man (and the teacher) for the rest of their lives. When interviewing potential employees these days, as a manger I of course do a cursory level of internet research. Can you imagine wanting to hire somebody who has this kind of thing in their background when you do a Google search of his name?

A subject for another essay is the somewhat puzzling response in the community where this event took place. Because the young man in question is a popular kid, captain of several sports teams, the community has united behind him with a petition of more than 2,000 names asking for his school expulsion to be reversed (I have an uneasy suspicion that this is so he can lead a sports team in playoff action). Yes, it's possible that felony charges might be overkill for this transgression. But a month or two of school suspension to teach the lad a lesson certainly doesn't seem inappropriate. We're not talking about a kid being suspended for having a pen knife in the glove box of his car parked in the school parking lot. This is real stuff; effectively an assault on the teacher.

The local chief of police commented on this, wondering why the support was mobilizing behind the young man and not the young teacher who has been so badly humiliated and embarrassed by the event. And why is it, I wonder, that the young man and his family are maintaining such dead-fast silence. If I'm this kid's father, I grab him by the ear and lead him to a microphone. A public apology for the unintended consequences of his action might go along way to justifying a response of understanding and leniency toward him.

No doubt the family is acting on the advice of lawyers, who as we all know exist in their own make-believe world.

The first sign that this brutal winter might eventually give way to Spring was seen in downtown Minneapolis today.... 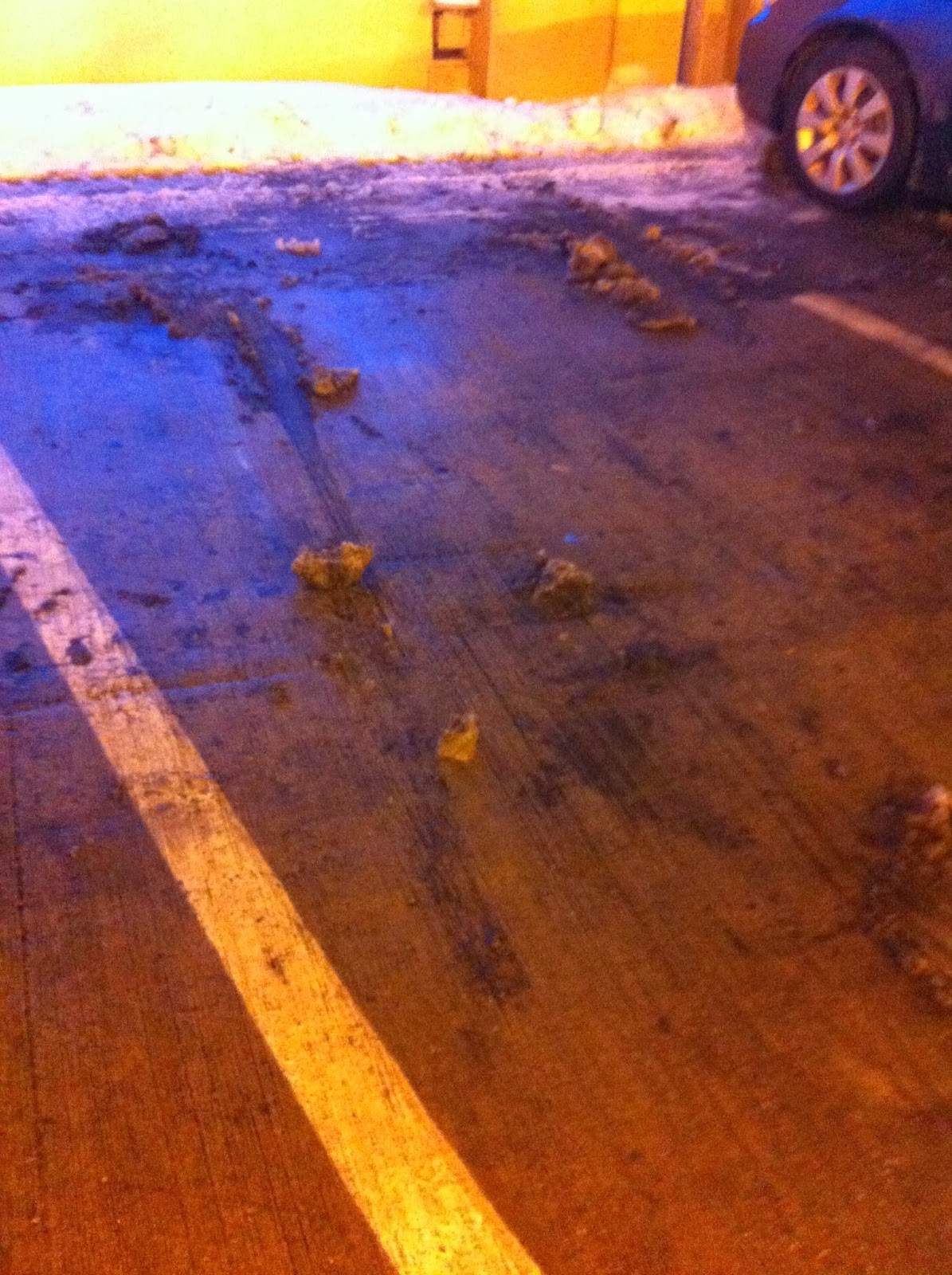 At the end of the day in the parking ramp where I park, the concrete floor was covered with hundreds of crusty, dirty globs of hardened of ice and snow born from automobile undercarriages and wheel-wells, loosened by the first above-freezing temperatures in almost two months.

In fact, the last month of winter in Minnesota is known by a native American word from the Dakota Sioux tribe that translates thusly:  "the time of the snow boogers."

Spring, it is out there somewhere.
Posted by The Geezers at 6:36 PM 9 comments:

In the waiting lounge for gate 41, terminal A of Los Angeles international airport, a young family from Texas sits near me in the isolated cul de sac of chairs at the back end of the room. Dad wears a ball cap that says Texas on the brim, and from the evidence of a Disneyland tote bag, I assume the family has   been vacationing in southern California and is returning home to Dallas, where I will be pausing only briefly on a layover to Minneapolis.

They are an attractive, affluent family. The father has the muscular, healthy bearing of a serious weekend athlete, the mother is thin and lithe, perhaps a yoga practitioner. Their casual clothing is expensive, from top brand names, and the kids, a girl about 10 and a boy about 8, each have their own Ipad encased in a soft leather protective sleeve. It is a picture book family; the parents bear a slight resemblance to a young Kevin Costner and Christie Brinkley, and the kids could be models for television ads.

But it's quickly apparent that there is some kind of tension here. Mom sits down with the two kids on either side, and Dad offers her a piece of fruit, which she declines with a terse shake of her head without looking at him. She focuses, somewhat defiantly, on her smart phone Twitter or email feeds; her thumb scrolls briskly. He sits down near his family but slightly removed from them, a weariness evident on his face.

Within a few minutes of scrolling on her phone, abruptly, Mom breaks into quiet tears and quickly goes to the restroom to compose herself. I wonder, briefly, if there's been some sort of family emergency back in Texas; perhaps it's worry causing the obvious unhappiness in the little family. But when Mom returns from the rest room, eyes dry, makeup fixed, and lips tightly pressed together, the anger at the husband is clear. She refuses to look him in the eye, and instead draws her children toward her from each side, the universal move of a mother retreating from her husband—nesting tightly with the kids to the deliberate exclusion of  the father.

Dad is decidedly miserable, and when he glances my way and see that I've noticed their family drama, he reddens and looks even more woeful. It's impossible to know, of course, but I wonder what his offense was. Am I eavesdropping on one of those entirely normal little moments of family tension brought on by holiday fatigue and too much frenzied activity?  Or is this a deeply ingrained family problem that threatens more seriously? Did he forget a camera on the cab to the airport,  or is he sleeping with a secretary?

At that moment the announcement comes beckoning families with children to board early. Fifteen minutes later as I board and move through first class on the way to coach, I see all four members of the family sitting across a full row in the luxury section. Mom and Dad are each in window seats far apart, with the kids in the aisle seats. They are still playing games on their Ipads, but I can see now that they're uneasily aware of the tension in their parents, and have focused on their electronics to avoid the discomfort of a family that  has ceased to be nurturing.

The reality for this beautiful family is a little ugly right now.
Posted by The Geezers at 6:29 AM 13 comments: