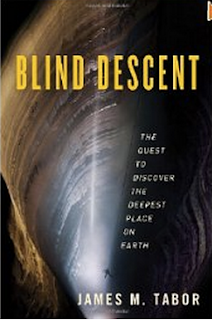 Every so often, I get on a jag of reading books in a particular genre, or everything I can by one author. Awhile back, Jeffery Eugenides struck my fancy, and in the space of a week I devoured all four of his very excellent novels.

In recent years, though, it's often been science/nature non-fiction that strikes my fancy, with writers like John McPhee, Edward Abbey, Sebastian Junger, Mary Roach, Stephen Jay Gould serving as favorite targets for weeks at a time.

Last week I mentioned a book called Spillover, an excellent book about the heroic characters who trace the originals of highly infectious diseases the "crossover" from animal species to humans. This week, I'm highly recommending Blind Descent, an accounting by James M. Tabor of the race to find the deepest cave on earth a few years ago.  From the publisher's description:


The deepest cave on earth was a prize that had remained unclaimed for centuries, long after every other ultimate discovery had been made: both poles by 1912, Everest in 1958, the Challenger Deep in 1961. In 1969 we even walked on the moon. And yet as late as 2000, the earth’s deepest cave—the supercave—remained undiscovered. This is the story of the men and women who risked everything to find it, earning their place in history beside the likes of Peary, Amundsen, Hillary, and Armstrong. In 2004, two great scientist-explorers are attempting to find the bottom of the world. Bold, heroic American Bill Stone is committed to the vast Cheve Cave, located in southern Mexico and deadly even by supercave standards. On the other side of the globe, legendary Ukrainian explorer Alexander Klimchouk—Stone’s polar opposite in temperament and style, but every bit his equal in scientific expertise, physical bravery, and sheer determination—has targeted Krubera, a freezing nightmare of a supercave in the Republic of Georgia, where underground dangers are compounded by the horrors of separatist war in this former Soviet republic.

This hardly does the book justice, as I've rarely seen a work of non-fiction that more compellingly recreates the sense of adventure and danger that is inherent in the lives of world-class explorers. Even in the armchair, you may have trouble not feeling uncomfortably claustrophobic. At one point, for example, we hear about one assault on a super cave the required the team to crawl on their bellies through crevices no bigger than the underside of your kitchen sink cabinet for three consecutive, non-stop days, at point wriggling through constrictions that required them to exhale completely in order to squeeze through. The literature of cave exploration is full of instances where cavers get caught in such squeezes, with their rescuers forced to break their bones and dislocated their joints to extricate them. In the midst of these expeditions forcing people underground for two or three weeks at a time, there was the ever-present danger of the Mexican rainy season coming early, filling 4 miles of cave entirely with water. Death among explorers of super caves is said to be far greater than among those who try to conquer Mt. Everest.

I can't recommend this one highly enough for armchair adventurers of Geezer vintage.
Posted by The Geezers at 4:44 AM 4 comments: