Minneapolis folks are a little confused today, weatherwise, and it’s easy to understand why. Within the space of 10 days we’ve had a major 12-inch winter storm snow, then some warm days culminated by a two delicious weekend days of 80 degrees. The citizens of the 4F bus into downtown Minneapolis this morning reflected that confusion, with garb ranging from cutoff shorts, tanktop T-shirts and open sandals (the kids heading for DeLaSalle high school on Nicollet island), to gloves and scarves (some of the older professionals heading for the downtown offices).

Danny seems confused in a slightly different way. Probably in his early 60s, he doesn’t fit into any of the standard downtown stereotypes. On the surface, he projects a kind of western cowboy appearance, with a Stetson hat and rust-colored canvas barn coat. It’s not quite consistent, though, as he also wears what appears to be older negative heel shoes (we used to call them Earth shoes, in my day), aviator-style wire-rimmed glasses, and newer JC Penny denim jeans (not Wranglers, not even Levis). His sand-colored hair is longish under the stetson, and his short beard is a mixture of white and buff, like the remnants of a small wood fire that leaves its white ashes mixed among the coarse sands on a beach.

Most unusual is the plastic covering for his Stetson, which fits like some kind of shower-cap, with an elastic band the snugs it up under the brim. Real cowboys, I'm told, will wear such a raincoat for their treasured stetsons on stormy days. But it's bright sun in Minneapolis today, and this covering looks like it is worn permanently on Danny's hat.  On the top surface of the hat’s brim, the plastic fits tight and smooth, almost like it’s been glued in place, but on the upper dome of the hat, there is too much plastic and it bunches loosely around the dome of the Stetson: I can’t help but think of the image of an extra-large Trojan condom being worn by a man who really needs the standard size. 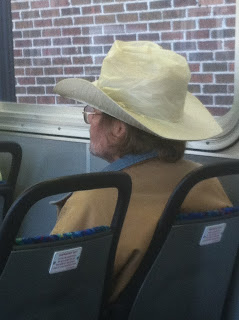 It’s very hard to gauge Danny’s story, though he projects the energy of someone a little down on his luck. I find myself wondering if the entire outfit is simply what he was able to find at some second-hand store recently. When the seat next to him gets taken as the bus fills up, Danny looks steadfastly out the window in embarrassed shyness, away from his seat companion, for the rest of the trip. And my hunch that he doesn’t fit the downtown society is right; he gets off the bus on Franklin Avenue well before downtown, a street dominated on this stretch by bars, soup kitchens, day labor offices, check-cashing shops and other businesses serving the edges of society.

It’s too far from my own office and would cause me to be late for work to do so, but I’m tempted to follow Danny to obtain clues to a little bit more of his story. But I think somehow that he has troubles enough, without adding a strange middle-aged guy stalking him on Franklin Avenue at 7:00 am in a monday morning.

As I watch him walk up the street, Danny hobbles just a little, but his steps are quick and he's making good time. As he reaches a gap between two building, full daylight fall upon him, and a beam of sunlight gleams off the plastic covering of his Stetson. Not a real cowboy maybe, but Danny has every right to the same springtime sunshine that favors us all.
Posted by The Geezers at 6:53 AM 8 comments: