—a news story commentary by Mercurious—

While my Buddhist leanings aren't fundamental enough to make automatically subscribe to full-blown belief in karma, it's not too hard to observe that all actions lead to consequences. In other words, while I have some trouble really believing that we reincarnate in subsequent lives on this earth, I fully believe that what we do here and now causes a reincarnation of sorts in later days.  What goes around, comes around. Leading a decent, good life may not cause you to come back in better circumstances in another life after you die, but it can be transformative in this life, right here and now.  Similarly, if you behave in mean, selfish ways, there will be some kind of payback in terms of quality of life and fortunes. 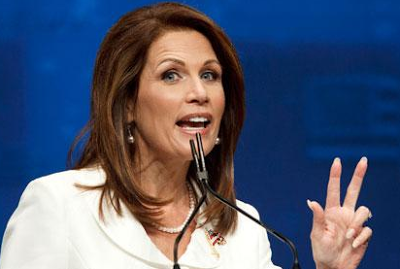 Michele Bachmann is Minnesota's own embarrassing representative of tea-party ignorance and bigotry. This is the woman who has argued that because the last swine flu epidemic came under Jimmy Carter, there was a causal relationship between disease and democrats; who believes that there are "hundreds and hundreds of scientists, including many nobel prize winners," who subscribe to intelligent design; whose family business is aimed at "curing" gay people of their transgressions against God; who believes that it is unconstitutional for the government to conduct a census.

There is no more paranoid, parochial person in politics—so much so that even writing a blog entry about her will put you on the Bachman organization's radar. Bachman comes from the Richard Nixon camp of political paranoia, clearly. My own brother, after writing a critical letter about Michele Bachmann's stance on gun control, was investigated in person by authorities at the request of the Bachmann organization.

A recent news story, though, suggests that the "what goes around comes around" adage is now starting in motion. Bachmann is now being investigated for certain legal violations that involved stealing a list of home-school families in Iowa in order to campaign direct to them before the primary last year. Now, in terms of political corruption, this is very small potatoes, indeed. Our own beloved Hubert Humphrey routinely did far more outrageous things in terms of campaign strategy. In and of itself, this is no story at all.

But now the campaign organization is holding back salary payment from staffers until they sign confidentiality agreements to prevent them from leaking details of campaign strategies and illegalities. Such is the paranoia of the organization that they fear the secretaries who are owed $900 or $1000 will sabotage Michele's fortunes by leaking details to the press.

Now, this may be wishful thinking on the part of this liberal, but I'm predicting that we are now seeing the start of a gradual fall from national prominence to widespread ridicule and disgrace for the Teabagger Queen. The district Michele represents is one of the most conservative in all Minnesota, but even they are not ignorant enough to look away when it comes to financial extortion. The only thing worse than taking away a teabagger's handgun is taking away his money.

You heard it here first: Michele Bachmann will not win another election. The karma of paranoia is beginning to ripen.
Posted by The Geezers at 7:08 AM 2 comments: