—publisher's note:  "Citizens of 4F" was a running feature penned by Mercurious in a previous life for another little-read digital magazine.  This episode is a new introduction to that series, which features a series of personality profiles, real and projected, of the people Mercurious encounters on his daily commuter bus rides (the 4F line) between residential south Minneapolis and the downtown business district—


Gladys is a passenger I see both on the 7:00 am bus into downtown as well as the 5:45 bus out of downtown, maybe 4 days out of every 5 days that I ride. Recently, she has changed her behavior in a very noticeable way.

Now, people in general, and bus commuters in particular, are creatures of habit. Over the years, it has become common for me on the morning ride to take the window seat on the right side of the bus, four rows back from the front. At the first day, this was really just because the spot happened to be open, and as it subsequently was open most every morning, it grew to be became "my spot." 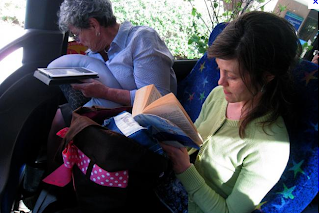 It offered certain advantages, because, as you've noticed, I'm a snoopy observer, and this seat lets me clearly see a good number of regular riders at the front of the bus.  It's this vantage that has allowed me to say, with authority, that approximately 40% of Minneapolis bus commuters bide their bus time reading books—a number that makes us considerably more literate than the US norm.  And I also know, with some authority, that of this number, E-book readers make up half (or 20% of the total ridership) and that novels are the the literary snack of choice.

Gladys is one of these literate bus commuters.  She is of modest means, as her clothes, shoes, and hairstyle attest. But she is certainly literate, and impressively so. She carries a book bag bearing the logo of an independent bookstore in Portland, Oregon, from which she brings reading forth material that is invariably weighty. No Danielle Steele for Gladys; she reads Joyce Carol Oats, Margaret Atwood, Faulkner, Welty, Steinbeck. And she is serious enough that she owns her books rather than borrows them; no library stamps on these editions. She does prefer bargain, mass-market editions rather more expensive hardcovers and trade papers, but this is no flaw.

As an editor, I appreciate anybody who prefers to buy books, even second-hand, over borrowing them from the library. It speaks of someone who values books, has many around the home, and likely rereads them again and again.

Gladys, well, she looks like a Gladys, which is of course why I've given her this name. She is slightly round, about 50, 52 years of age, with a slightly frizzy hair treatment that suggests either a poor permanent-curling, or a treatment in need of renewal. Not quite beehive, but trending that way.  There isn't a lot remarkable about Gladys, and I imagine that a great many of the regular riders don't even recognize her as a regular.

Gladys normally takes a seat opposite me on the bus aisle,  three rows back. This too, just happens to be a habit, as the bus is quite empty early in the morning, and we both really have our choices of seats.

A week ago or so, a very interesting behavior began. When I get on the bus in the morning and begin walking down the aisle, Gladys now quickly gets up from her normal seat and scurries up to occupy the one that has been my more-or-less traditional home for years now.

Now, this would not be even noticeable, and certainly not something I'd even wonder about, if the seat was already occupied when I boarded the bus in the morning. The fascinating thing is Gladys' apparent need for me to be fully aware that she is deliberately moving into this seat so as to deny it to me.

Initially I was puzzled and a little annoyed. It's certainly no issue to me where I sit on the bus. But the fact of Gladys' deliberateness was a obvious statement of some kind. Then I grew concerned, and worried that I had inadvertently slighted her in some way and that her actions were a communication of some kind of anger. Had I accidentally cut her off in the aisle on some ride recently?  Had she tried to say hello on the street and had I ignored her? (This isn't uncommon, as my hearing isn't great these days). Or was she annoyed with the way I study people and using her act of as a way to say "bugger off, pal."

I could find no such faux pas on my part. My study of fellow humans is done very subtly, and I really don't think anybody catches on to the fact. The verbal portraits I draw about people are concluded from dozens, if not hundreds, of small glances that collect over many months.  I certainly don't stalk anybody, and don't ever stare at people for long periods at any one time in a way that would offend them.

And my memory is still good—almost photographic for visual things—and I would remember any act on my part that could be taken in an insulting way. No, these little acts of deliberate, mild hostility in Gladys seem self-born with no original causal event to explain it.

Then I found myself a little amused and even impressed with her. It shows more spunk than I frankly would have expected given her otherwise meek manner. It was mysterious, and mystery is fun. I was impressed in the same way that I applaud when a senior citizen burns rubber away from a stop sign.

I do wonder what the heck is going on with her, though, and at last have determined that her boss, who looks a little bit like me, is a real jerk giving her a hard time at work. Gladys' little acts of defiance toward me let her imagine that she's getting back at that asshole boss.

Tomorrow, I'm going to ask her if she wants to punch me in the stomach.  It will probably make her feel better, and maybe she'll smile later in the day when her boss starts to behave badly.  She is a small women, and it won't hurt very much. And besides, these days I am very well padded in that area of my anatomy.

Posted by The Geezers at 8:04 AM No comments: