Hard to be a Saint in the City 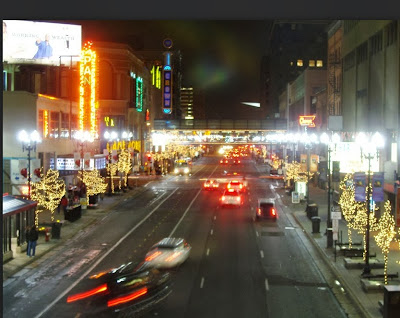 The world of serious vice in downtown Minneapolis contains itself, with great self-discipline, to five blocks of Hennepin Avenue from about Second street on the north side, to Seventh on the south.  During the working day, this little neighborhood neatly represents a niche between much different worlds.

A block to the west are most of the night-time music clubs, which draw in hundreds of young adults from the suburbs, looking to escape their ticky-tack world for something real. (One of our suburbs is actually called "Eden Prairie;" no wonder they're eager to eat from the tree of knowledge.)  These well-to-do child tourists might drink at the clubs, but for more serious criminal activity late at night, they'll move a over to Hennepin, if they dare.

A single block to the east from Hennepin is the ever so genteel Nicollet mall, which overwhelmingly caters to the busy folks wearing suits and business skirts. It is the world of Macy's and Nieman Marcus. The folks who shop here will do almost anything to avoid Hennepin, just steps away. Some business men, though, do slink over here later at night.

Hennepin, though, belongs to the fringe citizens of downtown, not the business and department store crowds. Though fairly civilized in the daytime, it's here that most of the gritty downtown action occurs later on at night. It's for this reason that the downtown police precinct office is located just a block away, because if there is a shooting or a major drug deal or a hooker related stabbing, it will most likely be near Hennepin sometime after 2:00 am.

It also is the major thoroughfare for the metro bus lines during the day.On days when I work late and catch a southbound bus at 6:00 or later, Hennepin Avenue in downtown Minneapolis is well along its transformation from a center for commerce to a center for the vices. You are starting to get a hint at what the avenue will look like later in the evening.

The indigenous Hennepin folks do wander about the rest of downtown during the workday, but you think of them differently when you pass them while walking at lunch. Then, you might see an occasional homeless person. Or, a fetchingly attractive young woman in jeans and carefully done hair, who you might guess is an exotic dancer. Not often, but occasionally, you might see a "lady of the evening" making her daylight errands. Unlike the exotic dancers, many of whom look like slightly needy college girls who stayed up too late the night before, the hard-core working girls wear their high heels and lots of makeup and a much harder facial expression all day long, even when running errands to Target. You will also see down-on-their-luck people, crack heads and schizophrenics pan-handling with cardboard signs printed with misspelled pleas for help in sharpie markers stolen from Target. One fellow is at least honest: "Need money for a beer," his sign says.

At six o'clock the tide begins to turn, though, as the workers head for home in the outer neighborhoods or the suburbs, and the street folks head back for Hennepin proper to reclaim their positions. By 7:00, the downtown bars have propped their doors open and the sidewalk smoking lounges are beginning to fill. The strip clubs are beginning to blare music, and sidewalk hawkers are beginning to loosen up and talk to the beat cops beginning to stroll. A few folks are beginning to enter the bars after work. 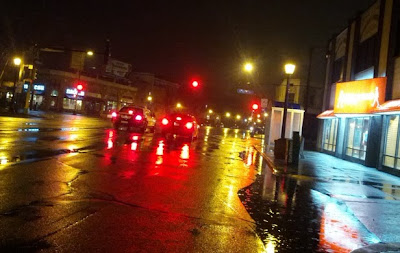 Though gritty, it is not a particularly dangerous world—at least not yet. In fact, this world has its own strange charm, for the neon signs remind you of old time Las Vegas or Atlantic City, and the tone is pretty much one of tolerance for all human frailties. Custodians sometimes hose off the streets before the night crowds assembled, and the wet concrete reflects the neon light in expressionistic murals. The late office workers at the bus stops mingle easily with drug pushers and hookers, because we all recognize one one another and no one is afraid. In the early evening, the streets still belong to both worlds, and I rather imagine the street people are quite happy to be seen as they truly are: hookers and pushers and strippers and cripples and hustlers and drunks.

At the bus stop one night, a hooker sauntered up to a beat cop leaning up against brick wall of Augie's nightclub . "Hey, Bobby," she said to the cop, clearly an long-time acquaintance. "Are the Republicans back in town, or what?" she said. "Look at all the fuckin' bankers still downtown at 7:00 on a Monday night."

She was talking about the rest of us, waiting for the bus to take us out of downtown. To the downtowners, we're all "bankers."
Posted by The Geezers at 6:12 AM 4 comments: