In the ongoing contest among the Geezers in on-line Risk play, the reign of the Professor as champion came to an expected quick end yesterday, as Mercurious once again emerged as champion in the latest battle. As anticipated, the Professor was quickly ousted from play by the merciless Greybeard, though the speed of the conquest (the fifth round of play) was highly unusual, even by the Professor's low standards of competitive quality. 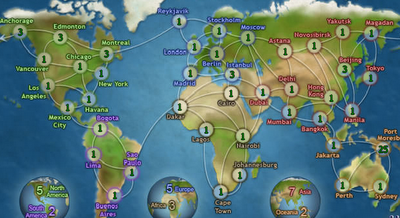 Historically, making the first conquest increases a Geezer's chance of long-term success in the game; however the gods of the dice then frowned on Greybeard, whose balls were eventually stomped by Mercurious.  Greybeard's terrible luck was passed along to the Financier, who met a similar fate at the hands of Mercurious.

Despite bitter laments from his last two conquests in the end-game chat, Mercurious was magnanimous, as always, as a winner, acknowledging that luck, rather than the skill which usually accompanies his many victories, was the prime mover in this contest.

The Geezers quickly put their animosity aside, and as these words go to press, they are already engaged in their new contest.