Why I Am Optimistic

"Nothing can be changed until you first recognize it."   -- James Baldwin.

The ascension of Donald Trump and his cohorts into the White House has certainly discouraged me much of the time and even depressed me on frequent occasions. Yet I have also been aware of a paradoxical feeling of optimism that occurs at rare fleeting moments. The odd thing about this is that the optimism has not been a matter of defiance—it's not an optimism I somehow muster in spite of the Trumpites.  No, the fact that we are now confronted with Donald Trump and his awful tribe is the very reason I'm optimistic. 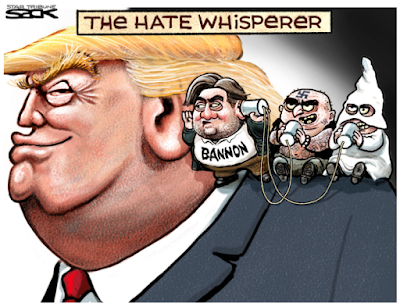 Up to now, I haven't really understood exactly what this was about. On the face of things, there is precious little to be happy about when you look at the state of the nation.  But I now realized that we are are in the process of learning something valuable about ourselves as a nation because of Donald Trump. It's a little like learning that that awful itch in the middle of your back is not an allergy but is actually shingles. The recognition feels awful at first, but then you start strategizing on how to deal with it.

We are beginning four years in which Donald Trump—with his lips and jaws being moved by Steve Bannon's hand and arm firmly stuffed up the President's rump—will be speaking in ways that will graphically show us the very worst things about our culture and prejudices. These are realities which America has really wanted to pretend did not exist, but will now confront in unavoidable ways.

We are learning that there is a substantial part of America that hates the poor and the sick. This is not hyperbole in any way. Much of the current rhetoric is implying pretty openly now that if you are reach and healthy, it is because God likes you, and if you are poor or sick, it is your own fault. There is a decided strain of Manifest Destiny theory at work now in America. We genuinely believe that America should win, and the implication of this is that the rest of the world is expected to lose. This really is who we are.

Fully half of America does not believe in religious freedom or tolerance. We don't.  We don't want Muslims to be among us, and we don't really care much for Jewish people, either. We really want to be a Christian nation, and as a nation we have elected a President who pays lip service to what we secretly wanted to hear all along. This is really who we are.

America hates brown and black people. We will begin by barring and expelling Muslims from a few countries, and we'll build some kind of barb-wire fence to the south, but once this is successfully accomplished, it's a quick step to closing the doors on those pesky Nigerians and Congolese and Koreans. It is not a matter of feeling safe or wanting to protect jobs.  We simply don't like anyone non-white or non-Christian. This is really who we are.

America places no particular value on education. The President who speaks for us wants a Secretary of Education who does not believe in public education.  Despite our pretense at valuing education, many of us don't believe in evolution and don't believe pollution has any effect on climate despite scientific evidence. This is who we are.

We don't like women very much. We are afraid and threatened by them, and, like our President, we would like them to "dress like women," and do what men tell them to do. This is not a purely male thing, really, because a great many voting women don't like themselves or their fellow women very much either, and are relieved that the President is setting rules of behavior for them. This is who we are. 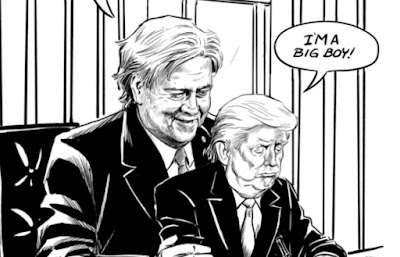 A lot of these truths have been present all along, but up to now we've uneasily pretended that we are better people than that. No more can we hide; we are quickly learning who we are as a nation, and the necessary lessons will be some unpleasant ones. This is the reason for my optimism, and I assure you that I do not say this with any sarcasm at all. Over the next four years, it will be very hard to avoid self-awareness about who we are as a nation, because we have a President who vocalizes our worst impulses. Self awareness is always a good thing.

A local newspaper recently interviewed some small-town Minnesotans, and one woman in a little community of 10,000 people confessed that while she had voted for Trump largely because of nervousness about Somalis in Minnesota, she was now surprised about how bad she now felt about herself when the refugee ban went into effect.

I was very encouraged when I read this article. The next four years will see a lot of us feeling bad about ourselves as we recognize things about ourselves through the example of our President. We will not be able to pretend that Donald Trump and Steve Bannon are "other." They speak for us. They are us.  This will prove to be a very good thing. Our President and his staff will be showing us our ignorance,  our prejudices, our intolerance, all our dirty little secrets, and I genuinely believe that learning these things about ourselves will only be a good thing in the long run.

You cannot cure a horrible disease until you recognize you have it.
Posted by The Geezers at 4:07 PM