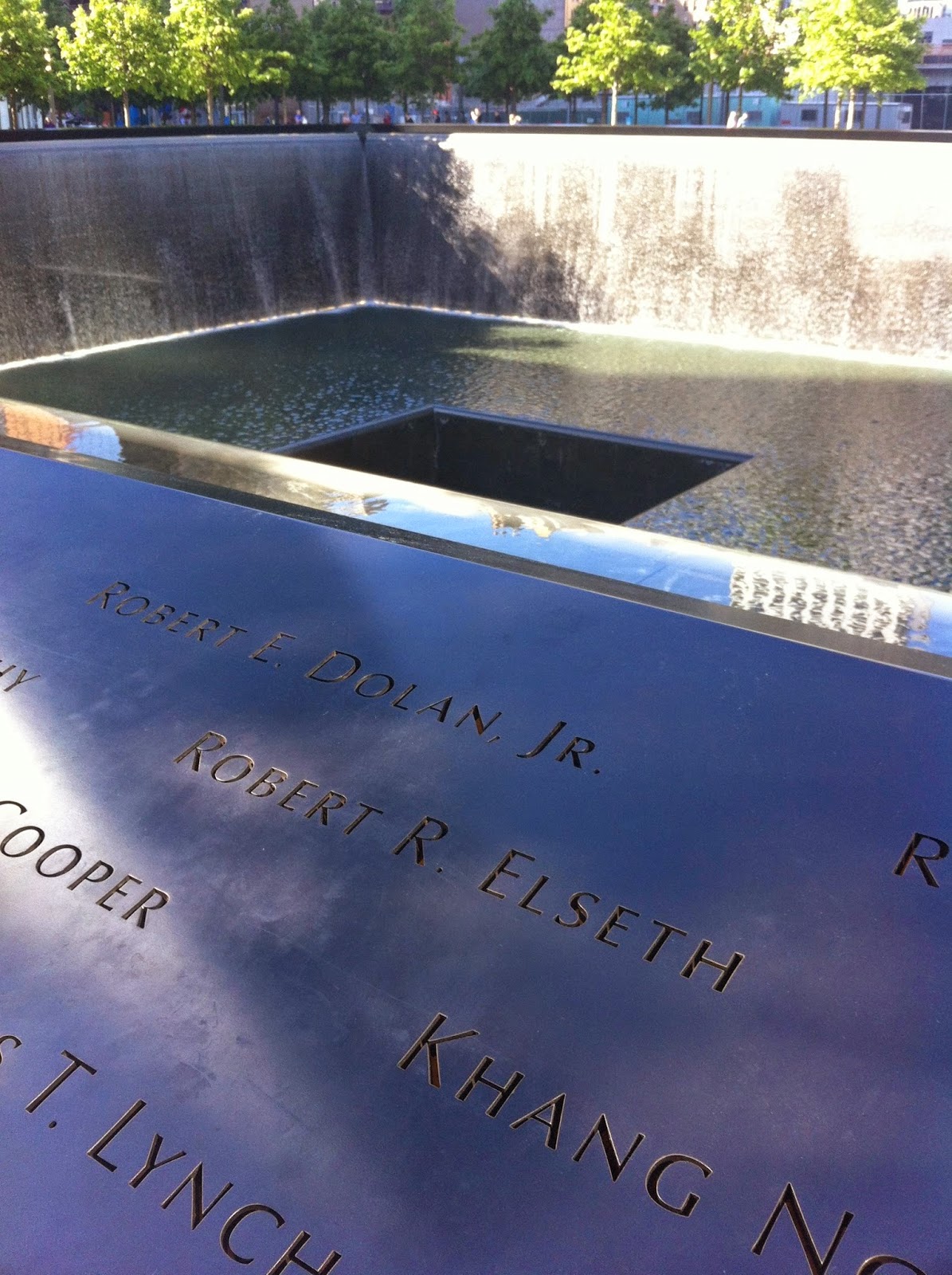 • At the 9/11 Memorial, an hour walk from my hotel to lower Manhattan, I wait on a stone bench between the somber pools with their rushing water for the museum to open. At this hour, the plaza has more security guards and NYPD officers than it does tourists. After 13 years, we're still not fully over our nervousness about that event; signs warn visitors against any behavior likely to draw a crowd or create controversy. Across the way, the new tower is still being completed, though the outer shell is pretty much done.  More than twice the size of the largest building we have in Minneapolis, it is a geometric study in opposing green reflective triangles.  It is a splendid building, and the whole scene leaves you with a combined sense of the nation's pride, fear, arrogance, and resilience. Years ago I came down to this site many months after 9/11,  and the scene then was still one of horror, even though the bulk of the rubble had by that point been removed down to ground level. Back then, I had witnessed the excavation site from a viewing platform constructed in front of St. Paul's Trinity churchyard; the metal fences around the church had still been plastered with photos of the missing, and the surrounding buildings had been draped in sheets of black cloth like enormous tombstones.

Today,  although some of us are clearly in a somber frame of mind remembering that morning or recalling earlier visits to ground zero, two couples approach me and hand their cameras to me with requests that I take their pictures in front of one of the pools with the new tower in the background. Eventually, I suppose, the site will lose its somberness and become just another tourist site for visitors. What is it, I wonder, that makes so many people want to have their pictures taken at historical sites?  It's something I've never fully understood—do they fear they will not remember the place unless they have photos of themselves present there? 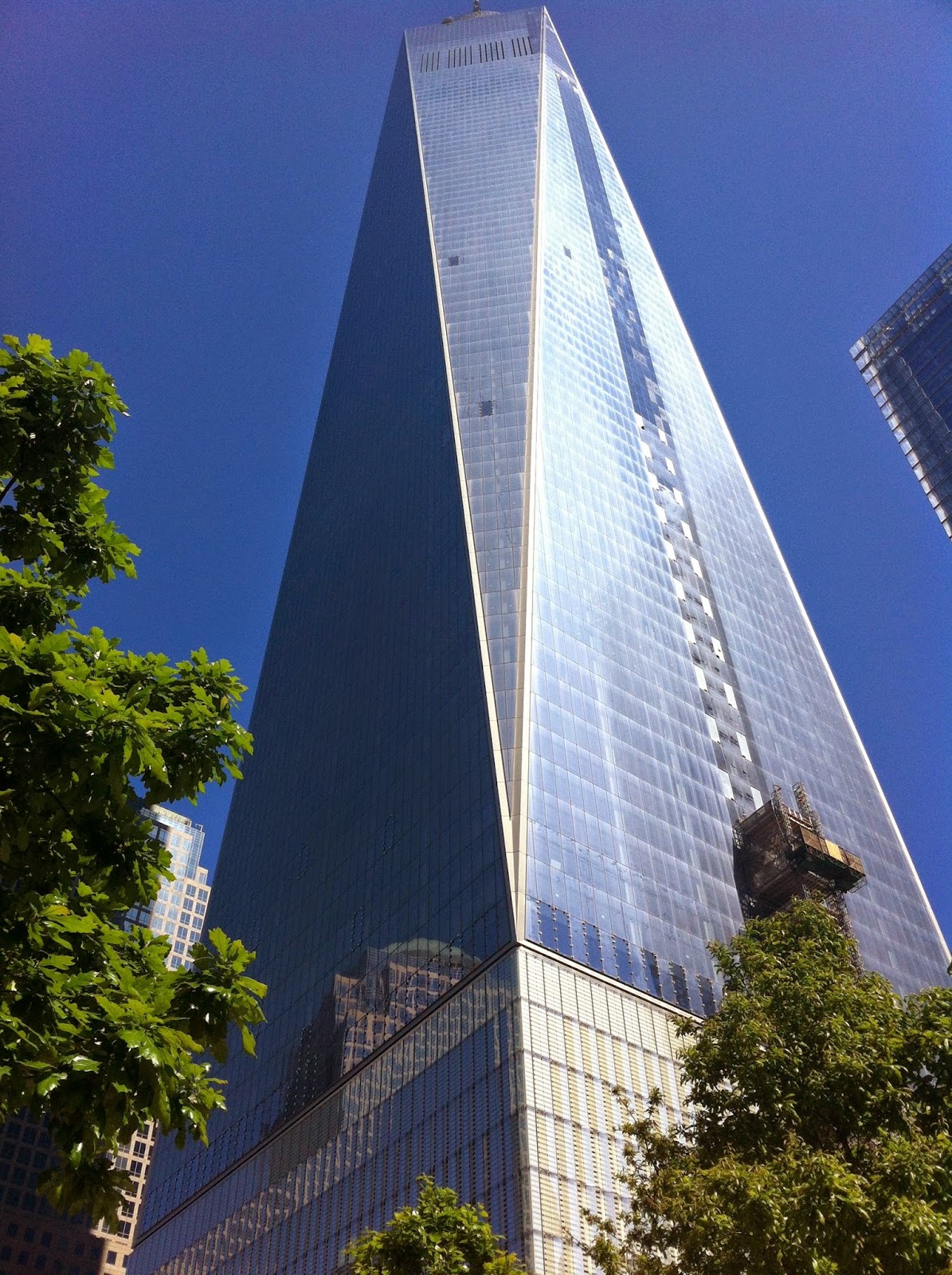 A tour group from Italy arrives, with a leader waving an Italian flag to keep his charges focused. One young girl among them wears a hijab, and she looks profoundly uncomfortable being here. Or am I projecting this upon her? Maybe she is entirely free of any feeling of cultural guilt as a Muslim from Italy.  It would be nice if that were so, but I see other visitors in the plaza pointing her out.

The museum itself is a terrifically interesting and dignified exhibit. Thousands of artifacts and hundreds of informational displays. The one that sticks in my memory is a single melted and burned driver's license found on the streets below and now exhibited behind glass—the license of a passenger on one of the planes.  This is one of the best museums I've ever seen.

• In the late afternoon, I happen upon Madison Square Park across from the Flatiron building, where a Filipino-American celebration is going on in the park and on the adjacent segment of Madison Avenue, which has been shut down for the day. I am 5 ft. 7" tall, and I'm interested to find that I'm well above average in height in a crowd of Asian men. The pretty young Filipino women seem to have a proscribed costume for the day: reflective aviator sunglasses and New York Yankees ball caps, with their long black hair pulled back through the opening in the back. It's an indication of the sheer size of this city's population that a Filipino celebration can bring out so many thousands of people.

• In Times Square in the early evening, the huge crowd parts suddenly, and I see a fully naked young woman, clearly enhanced by surgery, who has been dusted head to toe in green chalk or paint, the color of the Statue of Liberty. In her left hand, she extends an ordinary flashlight overhead like a torch. Instead of a liberty crown, though, she wears a headpiece that looks more like Christ's crown of thorns. She is accepting tips from people who want to have their pictures taken with her—a whole different kind of tourist photography.  (No, I do not get my picture taken.) Just up the street from this, a group of Disney characters are also soliciting tips for photos. I'm pretty sure they are not authorized by Walt's corporation. Mickey's knees are dirty with street grime.

• New Yorkers are renowned for the speed with which they conduct their lives, but it seems not to be true on Sundays. All day long, the pace is leisurely, with pedestrians moving at a pace that could barely be called a saunter. At 6:00 am, I have the streets largely to myself, but not exclusively so. This is, after all, the city that never sleeps. The various Starbucks shops along Madison Avenue are open, and at one coffee shop, a citizen wearing Dockers and expensive loafers comes out the door with his latte grande, and stops to drop coins into the cup of a street citizen sitting on the window ledge outside.  Exchanging a few familiar words, they call each other by name and wish one another a good day before the expensive loafers continue up Madison Avenue and the street citizen smiles after him and hefts his cup of coins.
Posted by The Geezers at 10:59 AM