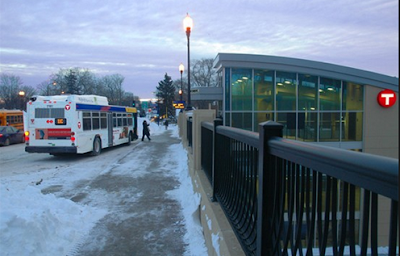 The 4F commuter bus presents a pretty representative sample of the Minneapolis demographic from the hours of 7:00 am to 9:00, and from 4:00 to 7:00 pm each day—the rush hour windows. In the morning, for example, the passengers on any given bus might include:  high school students wearing school letterman jackets as they head to De Lasalle high school; students from the art and design college who often defiantly omit hats and scarves even on very cold days; day laborers with worn, slightly grimy canvas jackets headed for the temp labor agencies on Lake Street; attractive young men and women in nice clothes,  eagerly pursuing entry level white-collar jobs in their hopes of one day becoming members of the last type of bus commuter—the older executives with long woolen overcoats and expensive leather gloves and briefcases, carrying Wall Street Journals tucked under their arms.

On any given morning, about 60% of the faces are familiar to me; the rest are infrequent or one-time riders, on the bus that morning because a car has failed to start in the frigid weather, or because they're riding to connect with the light rail train line running to the airport.

Fairly often, you also see one or two or even three members of another demographic—adults who appear to have some kind mild disabilities and special needs—adults who are traveling either from family homes or group residential facilities to occupational jobs in downtown. A friend of mine who managed one of these non-profit organizations that help find jobs for special-needs adults has told me that most do indeed commute into downtown via bus each morning. This morning on the 4F,  there was a new passenger fitting this demographic, who I think of as "Charles."

Charles sits at the front of the bus, gripping the side rail tightly with one hand while the other hand pinches his bus transfer with the thumb and forefinger. Charles is about 60 or 65 years old, with a two-day stubble beard that is not a fashion statement. His large, aviator-rimmed glasses don't fit very well and they keep sliding down his nose. At every street corner, Charles nervously leans up out of his seat to check the street sign. In the end, he'll do this for 55 consecutive blocks, since he doesn't get off until the heart of downtown. Periodically he looks up across the aisle at the row of lighted advertisement panels lining the top of the bus; he shifts his head up and down, trying to navigate the line in his bifocals, uncertain of which magnification to use for reading at this distance.

Charles wears new jeans, a crisp flannel plaid shirt, Nike tennis shoes, and a green nylon parka that is vaguely military in style, like the parkas you see on workers on outposts at the south pole. It is the type clothing that few people of Charles' age would pick for themselves, and it hints that Charles has somebody in his life that cares enough to pick out clothes for him to wear. Perhaps it is some kind of professional guardian, but maybe he's lucky enough to have a family member who serves this role. His jacket is wide open, though, and periodically it slides down his arms and back so that he has to shrug it up into place again. He doesn't seem to know anybody else on the bus, and as new passengers board, he looks at each of them with great interest.

When special-needs adults ride the bus, they almost always sit at the front of the bus, sometimes looking a little fearful, especially when the bus ride has not become a routine habit. Many years ago, I recall that kids with special needs riding the school bus always huddled in the front of the bus, too. There was a reason for it then, because kids can be profoundly unkind, and a special-needs kid who found himself at the back of the bus might experience some type of teasing or torment at the hands of other, some yelling the word "retard." We tend to romanticize the qualities of children, but the truth is that they are often cruel, and it's fortunate that as a species we tend to become kinder and more compassionate as we grow older. I find myself wondering if the reason Charles and others like him still ride at the front of the bus as grown adults is because they have ingrained memories of those earlier, harsher times.  We are all creatures of habit, and we all relive old experiences in our behavior without even really knowing that we're doing it. 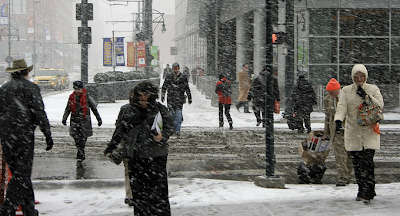 As the bus pulls up to his stop and Charles starts to stand, his jacket is wide open, and a nearby woman starts to reach out to help zip it up for him. Then she catches herself and leans back with obvious embarrassment; she's probably not certain whether such an overture would seem welcome to Charles, or insulting or threatening.

So Charles' parka hangs wide open, and twice slips down his shoulders to his elbows as he trudges up 5th Street in an easterly direction. He's quickly covered with snow that looks like powdered sugar. Blowing snow is falling heavily, but fortunately the temperatures have moderated this week, and instead of -22, the air is a relatively normal 25 degrees.

Provide his walk is not too far, Charles will be fine.

Email ThisBlogThis!Share to TwitterShare to FacebookShare to Pinterest
Labels: adults with disabilities, Citizens of 4F, Mercurious