—a Mercurious observation from March 1—

A London train station is a perfect microcosm of London itself. Today I checked out of my hotel and made my way to Liverpool Street station, on my way to Norwich to visit a fellow Geezer and his family. With 30 minutes to kill before the train departed, I trudged down the stairs to the public restroom. The cost for using the lue is 30p, and after sorting through a handful of change to identify 10p and 20p coins, I paused near the side of the restroom entry lobby and watched the crowd.

There were perhaps a hundred people milling about, some entering, some leaving the restroom There were all types represented, all nationalities—exactly like London itself. While I was waiting, five different foreign nationals approached me, mistaking me for a Brit who could help them pick out their own 30p fee from the handful of change they had. (This in itself tells you how friendly the British people are to visitors—in New York, foreign visitors would soon learn to be wary of asking natives for help.)  Within five minutes,  a Chinese business man, two round Ethiopian women, a fellow I believe was Portuguese, and a woman who was probably from Somalia all approached me for help picking out their restroom change.

The restroom attendant was offering similar help to others in the crowd. He himself was Indian or Pakistani, his shiny black hair tied back in a ponytail. He was exceedingly patient with the crowd, and especially so to the elderly British couples, whose problem wasn’t identifying the proper coin combinations, but figuring out how to insert them into the coin-operated turnstiles. These older Brits kept wanting to hand the coins to the attendant, and couldn’t quite figure out the mechanisms of the turnstiles.  Covering the floor were perhaps 200 pigeons flowing among the human feet, pecking about for crumbs of food,yet somehow never getting stepped on. It was utter chaos, yet at the same time a well organized chaos.

London is one of my favorite cities, for this exact reason. There is no more cosmopolitan city on earth. Walk a busy neighborhood for two hours at night, and you will hear snatches of Farsi, the clicking dialects of subcontinental Africa,  all manner of Romance languages, the guttural tones of Russian and Finland,  and the occasional American twang from the southwest region. British English is certainly heard less often than the sum total of foreign languages spoken. 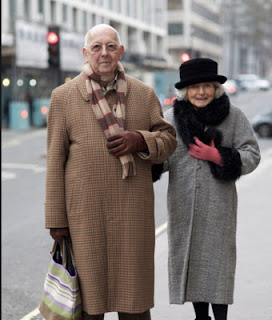 The visual types are equally diverse. The Brits themselves seem to be of two classes: ruddy-faced elderly British couples wearing raincoats with tweed caps and sturdy walking shoes, walking with canes; and mod young people, painfully thin with tight trousers and thin pointed shoes, and haircuts cut close and stylishly so to produce an androgynous look that makes it hard to distinguish male from female.

Among the foreigners, the young, wealthy Indian women almost always walk in pairs. They wear very expensive and stylish western clothes, precisely applied makeup, and top-of-the line perfumes that linger in the air for just a few moments after they pass you on the street. They are insanely beautiful, with sleek long hair that could not be any blacker yet at the same time seems to reflect every color of the rainbow.

They are in sharp contrast to many of the African women, who are round of face and figure, and often dress in styles of their home countries, with colorful wraps and  headwear. They are interesting and beautiful, too, but in a different way.

The many Asian people are oddly anonymous, as they don’t seem to speak all that much, and seem to be intent on not being visible at all. The exception are those who are clearly businessman. Asian business men often dress in suits, shoes and overcoats that are clearly very, very expensive.

There is a class of teenager and young adult that spans national boundaries. They wear Goth or neomilitary styles, with heavy black books, metal chains, combat trousers, Mohawk haircuts, body piercings and tattoos of all kinds. Yet for all their attempts to look fearsome and threatening, these young people seem utterly harmless.

London is a unique city for its almost perfect mixture of organization and chaos. Paris is very stylish and beautiful, but there is something a little haughty and antiseptic about it. Frankfurt and other German cities are beautiful in an old world way, but they are so carefully organized and precise that some of the life is squeezed out of them. Rome is another of my favorite cities, as I very much like the creative chaos and pure happiness that seems to emanate from the culture. But I can see how the frantic chaos could wear you out if you lived in Rome.

London, on the other hand, is a fairly perfect mixture of control and chaos, and aside from the high cost of living, it would not be at all hard for me to live here. And there is also the polite friendliness of the city, which is truly unique in my experience of large cities. If, as a pedestrian for example, a cab honks at you, it is almost certainly because you have done something foolishly dangerous. Bus drivers in London are invariably polite if you’re confused about the fare or proper use of an Oyster metro card.

As I was waiting from the train station today, the big schedule board was slow posting the platform from which my train was leaving. From a distance of thirty yards or so, a gatekeeper noticed my momentary puzzlement as I stood among a crowd of thirty people or so, and he left his post to approach me.  He studied my reservation sheet. “Yes sir, your train always leaves from platform 12. They really should have posted it by now. They have just finished cleaning your train, so please follow me and I’ll point out your carriage.”

Can you imagine this kind of thing at Grand Central in Manhattan?
Posted by The Geezers at 4:49 AM