Apropos of Nothing in Particular....


About 12 years ago, a massive 90-ft. tall sugar maple tree in my back yard, already at least a century old, began to shed huge limbs. After it destroyed my deck as well as the fences of neighbors on both sides, we decided to have the tree removed. Wasn't an easy decision, since I'm more fond of a nice tree than I am of many people.


On removal day, though, I had the removal crew leave a massive stump, some 10 feet tall and five feet in diameter, standing in the yard. I was vaguely planning to have some sort of outrageous sculpture carved from the stump, since it was still pretty good hardwood.

In practice, though, the stump became a self-drying source of firewood. For the next decade, whenever I wanted to build a fire—or when I simply wanted to burn off some frustration—I'd grab the ax and hack off a few more pounds of good, dry maple for the fireplace.

In the last year, or two, though, most of the firewood has been exhausted, and what remained was a gradually softening lump of decaying wood, now approaching ground level. This has been interesting in and of itself, for watching the spectacle of decay and the life that grows up in its midst, is a pretty fascinating study. All manner of interesting bugs and fungi have taken up home in this old stump over the years, and many birds and chipmunks have used it for food and shelter.

This weekend, though, I realized that it was time to take the stump off to ground level, and so several hours were spent hacking out its remaining bones.

Near the geographic center of the stump, within three or four inches of was the original center of tree judging from it's annual growth rings, I came upon the remains of a strand of ordinary farmer's barbed wire. It was an older style of barbed wire, and given its location, I realized that this must be an artifact of a time when our portion of urban Minneapolis was a farmstead. We are part of what is known as the Lyndale farmstead addition to the city. It's an area just south of the big city lakes, which themselves were country "getaway" resorts for the very wealthy families of old Minneapolis, with names such as Pillsbury. A hundred years ago or so, the land our house sits on was rural pastureland found well south of even the weekend resort locations. In those days, this was deep, deep countryside. 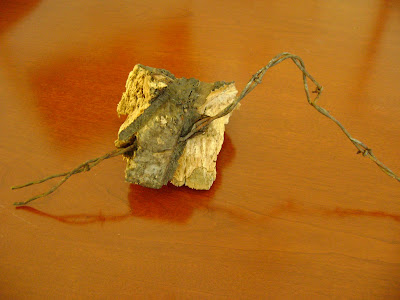 Our home was built in 1924, so it's pretty clear that this little piece of barbed wire and the tree it was nailed to is older than our home by a fair measure. Over the years, the maple healed itself of the indignity of being used as a fence post, covering over the wire with living wood, as it watched its home go from prairie wetlands to pasture to country home, then pre-war suburban development, than modern urban neighborhood with internet wires threading through its branches.

A couple of things come to mind as I look at this little artifact. One is the resilience of the natural healing process. In its maturity, there was nothing about this stately tree that indicated its lowly beginnning as a mere fence post, and it very successfully covered over its wound so that virtually no sign was evident. The piece of wire you see here was fully two feet from the visible world for many decades, buried inside wood tissue until two days ago.

But the second observation is that the tree was always a product of its wound, and the barbed wire nailed to it in the days of steam engines became an integral part of its nature, right up to the moment the last decaying wood was reabsorbed by the earth. I now remember that one side of the tree had a magnificent burl knot, with intricate wood rings that caused a friend of mine to request it for woodworking. It's entirely possible that the outer manifestation of this burl was in fact the tree's scar tissue built up over the barbed wire irritation within it. My maple tree was karma manifested, for everything that happened to it became an essential part of its nature.

And if a single piece of ordinary biodegradable iron barbed wire can survive a century buried inside a living tree, imagine how many plastic Aquafina bottles our great-great-great-great grandchildren will be digging up 500 years from now.
Posted by The Geezers at 8:09 AM