Most thoughtful Geezers have come to some conclusions about what separates art from the posturing silliness that sometimes tries to go by that name.

Recently, Mrs. Mercurious and I attended a dance performance sponsored through the local university dance subscription program. This is a world class performance series that in most years can be depended upon to bring in names like Joffrey, Bolshoi, the New York City Ballet, the Houston Ballet, as well as a number of top-notch modern troupes, such as Bill T. Jones, Martha Graham, Paul Taylor, Pilobolus, etc. Every season has a fair number of performances that hit the mark well for my esoteric tastes.

The series also misses sometimes by featuring productions that aren’t very good, and occasionally flat out bad. But that’s to be expected. We’ve been season ticket holders for 25 years, and we have no problem with seeing some fairly experimental performances. The nature of art, like genetics, is to constantly experiment to see if something new will work.

But I’m still muttering over a recent awful evening spent watching something called “Poliical Mother” from Hofesh Schechter, an Israeli born choreographer and musician, who has gained something of an international reputation for the avant gard.

The performance we saw made me think upon the difference between art and organic fertilizer.

(Now, it’s been pointed out to me that I’ve been known to exaggerate. This is perfectly true. I do this for on some occasions for dramatic effect. But I pledge to you all, Geezer and readers alike, that the following account is absolutely true). 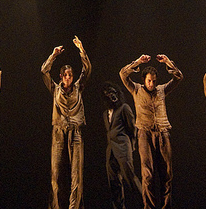 Entering the Orpheum theater in downtown Minneapolis, we found the hall filled with a hazy, unpleasant fog/smoke. The usher assured us this was intentional, not the start of a fire, and then sternly told us that for the next 70 minutes, no one would be allowed to leave the theater. If some emergency required it, no re-entry would be allowed. This was part of the artist’s vision, she said.

The choreographer’s notes in the program were borderline gibberish, offering no coherent story of what he was really trying to accomplish. We learned from the program notes that, during the musical composition, he had been mightily pleased when he realized he had achieved a sound that was “like trash you would pick up off the street.”  In the early days of rehearsal, he said the dancers had been forced to listen to pounding non-stop, non-rhythmic drum track for 5 hours a day until all their training was in shambles and the dancers themselves were nervous wrecks.

Most ominously, the program had stapled to it a small plastic packet with two foam earplugs in it.

The earplugs were entirely necessary, as it turned out, but were also entirely insufficient. As the performance unfolded, most in the audience also muffled their heads with their hands. My wife actually put on winter earmuffs to deaden the sound even further.

Our friend who was with us (he sometimes is known as The Maestro, as he is a gifted musician) left after 10 minutes; I made it to 40 minutes, then watched the rest from the lobby on the close-circuit monitor, where roughly 50 escapees from the concert hall  snorted and chortled at each preposterous new abomination we saw.

It’s really not worth explaining this dance. You could look it up for yourself here, in this link.The simple summary is to say that it was attempting to comment on how people are manipulated and controlled by both political and artistic tyrants. The irony was that no fascist dictator could more tyrannical then the bully who concocted this performance.

Thinking about this in the days afterwards, I recognized that this particular endeavor failed to qualify as art for me, for the following reasons.

Now, modern, avant garde art has always existed. I’m not such a stodgy old geezer that I don’t appreciate that art can and must sometimes tear down the status quo as part of the effort to suggest new realities. This is one of the key roles of art, and I applaud when it’s done successfully.

And I by no means am saying that all today’s art is bad art. I’m quite sure that the same Greek amphitheaters that were debuting Antigone were also showing some absolute crap in the matinees the following afternoon. The absurdist Dada movement that was the rage shortly after the 20th century opened had some truly amazing artists, but it also had trash. Decades later, some of the dramatic absurdists penned some very interesting work, but Edward Albee, among others, also did some really silly nonsense, too.

So this isn’t just an old bastard grousing about modern performance. Not at all. But I am now old enough and seasoned enough that I don’t have to appreciate an “artist” who clearly disdains his audience, and who is purely nihilist with no interest in vision.

My sorrowful night night at the theatre might be regarded as an artistic failure using other definitions, too. My favorite teacher ever, a literature teacher I studied with at the University of Minnesota, showed me how virtually all art could be understood through the cycle of the Divine Tragedy and Divine Comedy. The cycle of existence, and hence all art, is about the cycle between destruction and new creation. Tragedy is act 1—the sorrowful collapse of the old order; comedy is act two—the ensuing chaos and bedlam that ensues as a new order struggles to arise from the ashes. Even a painting, or musical composition, will have those themes if it aspires to art.

To be considered art, a work must contain at least traces of both elements, though it will predominate in one direction or the other.  Art will always have identifiable tragicomic themes in it.  Nihilistic chaos can't be called tragedy, and unintentional farce  that isn't anchored by real human frailty and vulnerability will also miss the mark.  Strike one, strike two, strike three for Political Mother.

I initially thought that I would categorize this particular performance as a  "catastrophe."  At the suggestion of another Geezer, though, I looked up the etymological roots of the word, and found that it has a time-honored connotation in its meaning as  the final act of tragic drama.  To call this dance performance a catastrophe, then, would be to malign the term.

"Debacle" seems quite safe, however.  "A total, often ludicrous, failure."

* Yes, in the photo of the performance shown above, that’s one of the dancers wearing a gorilla mask.