Reverting to form, Mercurious trounced Dr. Golf in the latter stages of a thrilling mano y mano. Earlier, the Mathematician morphed effortlessly into his comfort zone as the wearer of urine-yellow uniforms for the upcoming game (he surrendered first, in other words; yellow is a signal of disgrace in our world) and the Professor disproved Thomas Wolfe, wasting no time in going home again to Loserville. 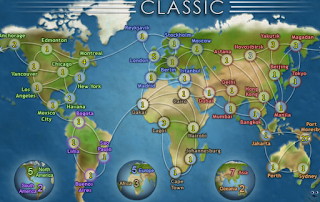 Dr. Golf shocked those in attendance by his careless and sloppy play, allowing the deserving but less talented Mercurious to snag yet another victory.  Mercurious, well known for his lack of self esteem in this world of gladiators, has been documented on numerous occasions sneaking out the back door in the dead of night to engage mere mortals in combat—thereby inflating his scoring and his ranking. This behavior has led the Hall of Fame committee to reconsider his nomination.

In the final measure, Mercurious owes his victory not to talent but to the fact that he received undeserved reinforcement as a result of Dr. Golf’s dereliction of due care in his play.

Not to worry, as Dr. Golf has promised to come back rested and poised for victory and celebration in the upcoming match.  For Risk fans, nothing could provide them with greater comfort and anticipation.  All they can do now is wait.
Posted by The Geezers at 1:20 PM